As in Doctor Who of course.  For those of you aren’t familiar with the “Doctor”, Doctor Who is a long running British science fiction show that has been on the air since the early 1960’s.  The Doctor is a Time Lord from the planet Gallifrey.  A two-hearted alien, who can live for hundreds of years and then regenerate into a new form when it is time for him to die.  The Doctor travels in a Tardis (which stands for Time And Relative Dimension In Space), which is a combination space ship and time machine, that is bigger on the inside than on the outside.  The inside has many rooms, but the outside can look like anything in the universe.  In one of the running jokes in the show, it happens to be stuck looking like a police telephone box from 1960’s London. 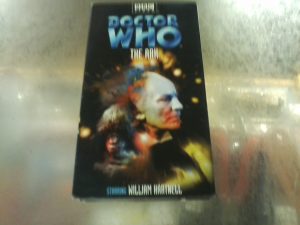 If you are familiar with the show, you are probably started watching it on BBC America on cable a few years ago.  This is the revamped series which has been on about 10 years.  I actually started watching Doctor Who in the 1990’s when it was broadcast on PBS on Saturday afternoons after work.  I was working at the steel mill then and I would come home and have dinner watching the show (this was pre-Mary Anne).  The new show has all sorts of high-tech special effects, but the old version was recorded directly on video tape and the effects were few and far between.  The Daleks (the evil robots that they are always fighting) were made of cardboard and shot shaving cream out of their weapons, the sets were so cheaply made that they would move when bumped against and such.  I still loved it though and still do. 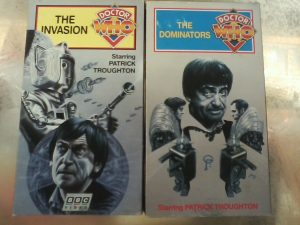 Since the Doctor could live forever and regenerate and the Tardis could go anywhere in time and space the originators of the show really set it up to last.  A certain actor would play the doctor for a few seasons and then it could be written into the plot for him to regenerate and he would come back in the next episode as a different Doctor.  The other stars of the show, his “companions” worked the same way, some staying for a few shows others for a few seasons and then they would be gone too.  But of course, because time and space travel was possible, favorite characters could always return to the show for later special episodes. 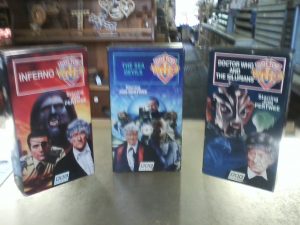 My wife got me all the CDs of the newer shows, but I longed to see some of the older ones again.  I found some for sale on Ebay.  They were all on VHS tape, of course, but I still maintain a tape player to watch my old favorites.  As they were originally recorded on video tape, it seems like the right way to watch them.  Just be careful that you don’t accidently erase the tape, like the BBC did to some of the original episodes – Egads!  Well, my new tapes came today.  I think that I’ll take them home and watch one when I’m done with work, at the Old Hardware Store…