Who Bit My Tongue?

This week I’ve got a problem with my tongue.  No, not THAT tongue, the tongue on my trailer.  I’ve had a little cargo trailer for quite a few years now.  My friend Randy got it free from a fellow for helping to clean out his barn.  He didn’t really need it so he gave it to me on the condition that he could borrow it back if he ever needed it.  That deal worked out well for me, as I use it all the time.  As a matter of fact we used it a few weeks ago to bring back a load of yard waste from our cottage in Fairport Harbor.  I was going to dump it onto one of our brush piles down at the farm, but that is where the problem started.  I left it down at the bottom of the hill by the pile too long.  When I wanted it next I found out that because I had not blocked up the tongue with anything, It had gotten mowed over, knocking the hitch locking latch off, and cutting off the light plug and one of the safety chain hooks. 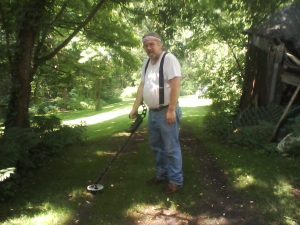 I found the latch, but could not find the plug or the hook, even though I broke out my trusty metal detector.  Oh well, I had an extra plug, and the hooks needed replacing anyway.  The main project was to replace the hitch.  I ordered one through the store (they are fairly inexpensive) and it came the next week.  The hitch just bolts on, but I was mainly worried about having to grind the bolts off, as they were really rusty.  Luckily I took my own good advice and sprayed everything down with penetrating oil as soon as I was sure about the repair, and let it sit for a week or so until I had time to tackle it. 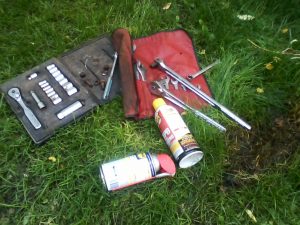 I used my trolley jack to lift the tongue to a comfortable position and got started.  I put my socket on a breaker bar (not a ratchet!) and got all the bolts to come loose.  I was really surprised.  I then fitted the new hitch on and all the bolt holes lined right up (I was hoping that they were pretty standard).  I wire brushed and painted the bolts, put them all back in their holes and tightened everything back up. 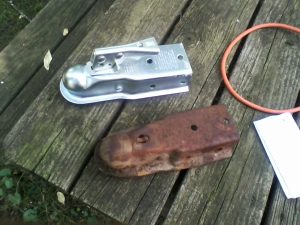 The hooks for the safety chains went on next, no problem.  The last item was the light plug.  I had just put a new light kit on the trailer this Spring (of course!), but I had saved the old wiring (there are advantages to being a pack rat).  Luckily the wires are color coded, and I just needed to match up the colors and use butt splices to attach the old plug to the wiring harness.  I used the better kind of splices.  They are pre-covered with “shrink” tubing, which shrinks down and makes a waterproof seal when it is heated.  I’ve had trouble with corroded connections before, and I figured it wasn’t worth taking any chances. 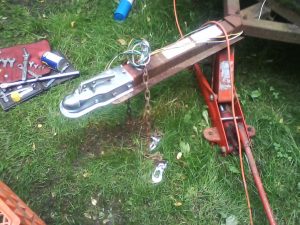 I tested the lights when I was done, and we used the trailer the next week to haul away some old mattresses. It was dark out by the time we finished and the lights worked a treat.  Next it will be used to take my display up to the antique power show in Burton at the end of the month.  Until then, it will sit in its spot by the barn, with its tongue properly blocked up so it can be seen this time.  Hopefully we won’t have any more problems with my tongue, at the Old Hardware Store…