Motors, motors, motors, last week I had fuel trouble with my Gravely, this week was electrical trouble with my friend Lou’s new boat.  Hobby boats have been described as a hole in the water, surrounded by fiberglass, that you throw money into.  This wasn’t quite that bad, but you get the idea.  Lou bought a new boat this year (not brand new), and he had a marine mechanic install a new (used) out board motor.  They checked everything out and said it was ready to go.  Lou put the boat in the water and tried it out and it worked fine, but when he went up to run it again the next week the main battery (it had two) was dead.  The batteries were brand new so Lou asked me to help him trouble shoot the electrical system with him. 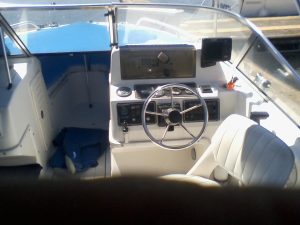 He keeps the boat in the water up at the Geneva state park marina.  We took a ride up there and it is quite a place.  There are several jetties with slips all along them all protected by a big break wall.  I brought a spare battery up with us and my battery load tester.  Lou had his volt/ohm meter and tools. 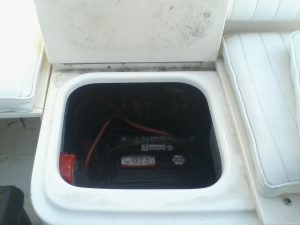 The first thing we did was to load test the battery.  The difference between checking the voltage of a battery and performing a load test is exactly that, a load.  A storage battery like a car or boat battery always will measure around 12 volts (unless it is really dead).  A load tester puts an electrical load on a battery equivalent to running a starter motor and it has a meter to show how much power the battery is putting out.  This is measured with the obscure units of cold cranking amps.  I don’t know how they rate this, but the more the better, and under a certain amount is no good (it’s marked on the meter).  The bigger the motor the more CCA you need. 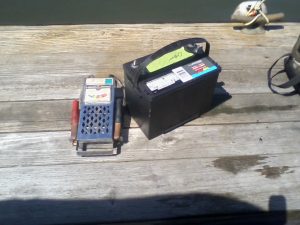 The battery has to be charged to run this test, and Lou’s battery was run down so he was going to take it home and charge it.  We put the extra battery in and the boat started right up.  We also checked the other battery, and it was fine.  This boat like many better ones has two batteries with an either one or both selector switch on them.  This theoretically always gives you a second battery to start with.  Both batteries can be turned off, and they were when the one went dead, but there is a “hot” line that runs to the bilge pump that is always on.  We began to think that this had been the problem all along as there had been a lot of rain the previous week. 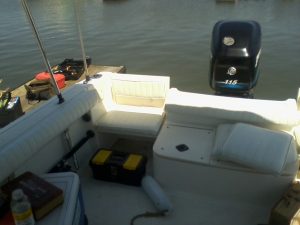 We looked over all the other wiring and it all looked OK.  There did not seem to be any draw on the battery as long as the bilge pump was not running.  Our suspicions seemed to be confirmed when another fellow at the end of the dock saw our meter and asked me to check his battery too.  It seems that it was dead also even though his boat was brand new.  We took the boat out on a short cruise and it seemed to be running fine.  We decided to leave the traded battery in the boat to see if it would hold a charge until the next time Lou went up to the lake.  It turned out that it did, and the other battery tested good once charged, so it must have been the rain.  So no money down the hole this time, but there’s always next time, at the old boat shop…