What’s The Charge? Why Does My Screen Take So Long?

I know that last time I said that I’d write another blog about window screens this week, but I was just kidding.  I actually want to talk about how I spent my day off on Wednesday, putting in my garden.  Before I could plant it though, I had to till it up.  That required the use of my favorite implement of destruction, my Gravely rotary plow (insert maniacal laughter here). 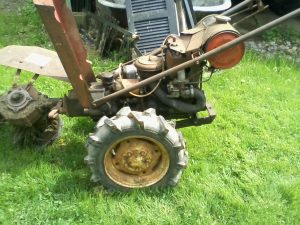 Those of you who are under 50 years old probably have never heard of the Gravely Tractor Company, and if you have you are probably thinking of one of those silly zero-turn mower things.  But before anyone had ever dreamed of a zero turn mower (1935 to be exact) Benjamin Franklin Gravely introduced his model “L” convertible two wheel tractor.  This revolutionary invention consisted of an engine (he designed that too) mounted on a transmission with two speeds forward and reverse, mounted on two driving wheels.  Motor cultivators like this had existed before, but the magic innovation that Mr. Gravely added was a front mounted power take-off that could also power other implements such as mowers and cultivators.  These tractors were so good they were produced with only minor changes until 1975.  Then, when it became uneconomical to build their own engines, they adapted the basic unit to other common engine makes such as Kohler and kept it in production until 1989. 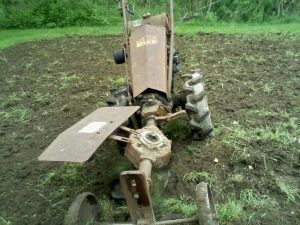 The beauty was that all of these implements were interchangeable, so that a 1930’s mowing deck could be hooked up to a 1970’s tractor or visa-versa.  By the 1960’s there were close to 40 different bolt-on implements available.  Easily the most fearsome of these was the rotary plow (although the buzz saw was pretty scary too!). 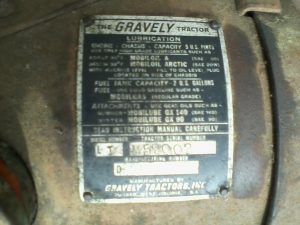 The tractor that I wanted to use to plow my garden is a 1960 model by the serial number, only 58 years young!  I had had trouble getting it started last year, and since I had spark and it would “pop” on starting fluid, I figured that the carburetor was gummed up.  This has to do with today’s gasoline.  I’m not sure what the difference is, but it only seems to stay fresh for about three months, after that it starts to gum everything up.  A friend of mine that collects antique cars has had the same problem and has taken to draining all of the fuel from his cars after a run and not gassing them up until next time. 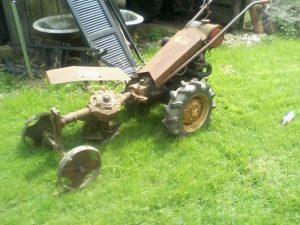 I had to disassemble the carburetor (sorry no pictures, but never fear, I’ve got another one to do), clean all the jets and passages and reassemble it.  Then the tractor started on the first pull.  I checked the oil in the engine and the air cleaner (try that with a modern engine!) and topped up the gear oil in the rotary plow.  Then I started on the garden.  A rotary plow is a unique instrument; imagine a small ship’s propeller rotating under power and then being pushed SIDEWAYS! through the ground.  The way the dirt flies is hard to imagine, in spite of the optional “dirt shield” that my plow has mounted on it.   It makes a standard roto-tiller look like a harmless child’s toy in comparison.  Let’s just say that you don’t want to get too close. 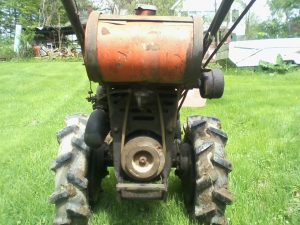 Speaking of too close, make sure that you stay away from the unguarded fan belt spinning right in front of you.  Safety was thought of a little differently back when the Gravely was designed.  They didn’t bother to put a guard on the belt, but they did mention in the instruction manual to “stay away” from the fan belt when the motor was running.  Besides, with all the action going on in front of the tractor, who was worried about getting a finger or two caught in a little belt? 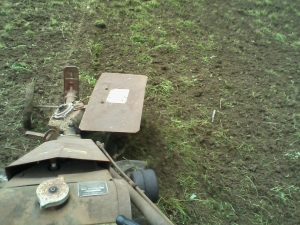 Needless to say, the garden was tilled up in record time and I will proceeded to get planting, just as soon as I get the gas drained from that Gravely.  Welcome to my life in the time warp, at the Old Hardware Store…