Yesterday was my day off, so of course I was at the store working. I’ve been trying to get some better lighting up in the paint department and as it was a pretty big project, so I could not do it during the day in between customers. Yesterday I had Paul working at the store, and my buddy Lou was looking for something to do (at least that’s how I took it when he called). So I had him meet me at the store to change out the lights. The lights in that room had been iffy at best for a long time, but now the time had come to make the change. The original lights consisted of 4 four foot tubes, and 4 eight foot tubes all fluorescent, 460 watts worth. This should have been fairly bright, but whoever hung them originally (Before my time) had simply hung the fixtures above lenses in the drop ceiling without any reflectors above them. This meant that about half the light just bounced around in the upper ceiling over the drop panels and only a little actually came though to light the room. On top of this over the years 2 each of the four and eight foot tubes had quit working because the ballasts had failed. No doubt about it, these lights were overdue for replacement. 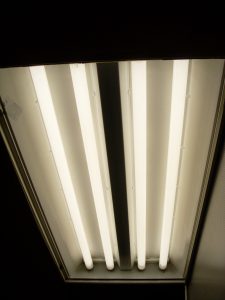 As luck would have it, a few months (years?) ago an electrician friend of mine had dropped off some used built-in drop ceiling lights that he was replacing for a job that he thought that I might be able to reuse. I did hang the one good one in our lawn and garden room where I needed more light, and it helped a lot. The other fixtures, however, needed new tubes and ballasts and I was hesitant to invest all that money in rebuilding fluorescent lights when LED’s seemed to be the wave of the future. So they just sat in the basement until I came across a deal for some LED fluorescent tube replacements for a really good price. 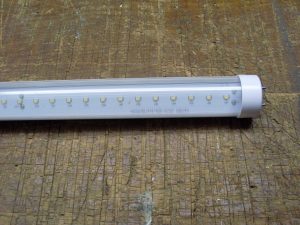 The LED tubes are pretty cool, they mount in the existing fixtures and have a cute little row of LED modules running down the middle to provide lots of light for only 15 watts per tube. The new tubes required 120 volts of power and did not require a ballast. So I stripped the ballasts and extra wiring out of the old lights and changed the wiring to accommodate the new setup. I tested them on the bench with a pigtail cord and they worked great. When I met Lou I was almost ready to go. We finished rewiring the last fixture and moved everything upstairs. After turning off the power we got out the ladders and moved all the ceiling tiles and disconnected the old fixtures. Luckily there was enough room to slip the new lights into the frames below the existing fixtures and we could just leave them in the ceiling. 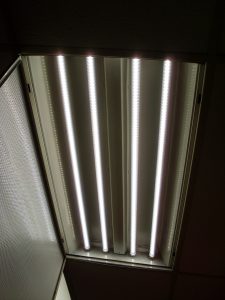 Once we had wrestled them into place the last thing to do was to wire the new lights up to the power feed and hit the switch. Man, did we have light! They were almost too bright. So for a new total of 180 watts versus the original 460 watts we had roughly a 60% savings in electricity and no more tubes or ballasts that need changing. Paul too one look in the newly lighted room and said, “Hey, we sell paint here!” I tell ya’, I get no respect, here at The Old Hardware Store… 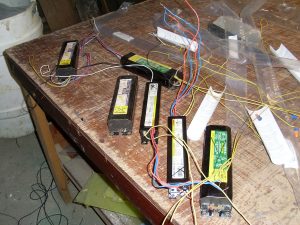