As you know, I’m a fan of all things vintage. Today I had a chance to work on some vintage lighting. Lots of folks are into vintage chandeliers and desk lamps or such, but this was something different, vintage fluorescent. I know I just heard everybody groan, “But I hate fluorescent lights!” Well I do too, but mainly the new, boxy ones that have about as much styling as a shoebox. The one I put up today is different, lots of vintage style and built like a brick you-know-what. 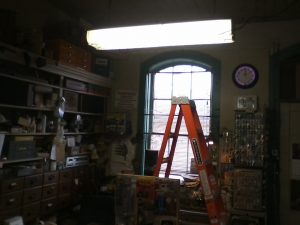 I spotted it at the second hand store yesterday, for only three dollars. I knew that it would need to be rewired, but that was OK. I figured a new ballast and tubes, maybe even an LED tube upgrade. I tested it today first thing though, and it actually worked fine. Didn’t even need new tubes. This model is an old one and it takes starters also. They are the little pop can-looking things sticking out underneath where the tubes go. These produce the starting surge that fires off the tubes to get them to light. They can go bad, but these were working fine. 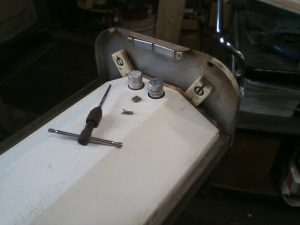 I did have to re-tap one screw hole where the egg crate diffuser bolts on. Someone had dropped a screw and tried to replace it with one with the wrong thread. I ran a tap through the hole and put in the correct screw and we were done with the refurbishment. 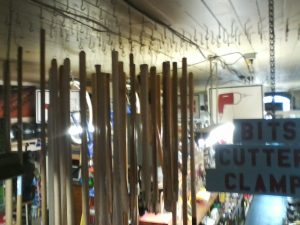 Now I had to get it up there. I need the eight foot stepladder to get to the hardware’s high ceiling and it is quite a view from up there. There are a million hooks in the ceiling, but, of course there weren’t two where I needed them. I drilled a hole and put up a hook the correct distance from the other one that I needed to use. Then I had to put up the fixture. I took out the tubes and side diffusers (they are glass!) and it still weighed a ton. New fluorescent fixtures are about as thick as a pop can, but there was real metal in this one. After I got it up and level, I installed the tubes, glass sides and the eggcrate. I plugged it in and it puts out plenty of light. Not only that but it looks cool too, even when it’s off. 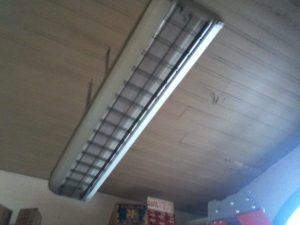 Now that the lights are back on, I suppose it’s time to get back to my real job, at the Old Hardware Store…