Vintage Lighting And Now For Another Exciting Adventure…

Well I fell for it again. I’ve always had a problem with tempting fate. Not with the big stuff, mind you, like jumping out of airplanes or something like that. Only with the little things in life. So if you read my blog, or drive by the house you now know that I got a “new” car. It’s a 1995 Jeep Wrangler that I wrote about a few weeks ago. As I wrote in the blog, I was pleased that for such an old car it was in pretty good shape. “Was” being the operative word. Sure enough, about a month after I got it, it got tagged pretty good, and I wasn’t even behind the wheel. I’ll tell you the story and you can decide for yourself.

It started out simply enough. I drove the Jeep to work and parked it behind the store on Kirtland Street. It was in a row of other cars parked diagonally along the curb. It should have been pretty safe. Sometime after lunch I was working in the store when I heard a “Wham!” I thought that it might wave been ice falling off the roof as that happens from time to time. I looked out the back door to check if the dock was damaged and didn’t see anything. Just then the lady that works in the Army-Navy store behind us saw me and called out, “Dave, someone just hit your Jeep!” I looked and sure enough a car had left the traffic circle and run across the traffic island, coming to rest against my front end. 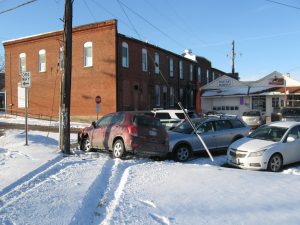 I grabbed my coat and went out to make sure the driver was OK. The young lady was out of the car by the time I got there and said she was fine. Someone called the police and while we waited for them to show up, I reconstructed the accident in my mind. The car had been traveling North on the East side of the circle and when she got to the left turn at the end she had turned too late and run wide on the turn. The tire tracks went across the traffic island to where she had hit the telephone pole with the driver’s front fender of her car. It then pivoted sideways and continued forward into my driver’s front fender and the front end of the car next to mine. What a mess! 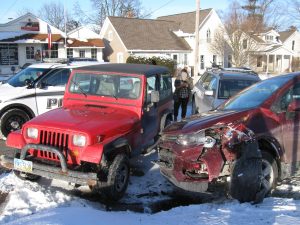 One of Burton’s finest took down the facts and I had to make a statement while we waited for a wrecker to come. Of course you know that it was the same driver that towed away my Escape after my accident last Fall. He commented, “Is that your Jeep? You’re not having very good luck.” Actually I was pretty lucky as my Wrangler was still driveable and nobody got hurt. I just had to play the car insurance shuffle one more time and I’ll get the fender fixed once the weather breaks. Just keep an eye out for a two-tone Jeep with a crunched fender, at The Old Hardware Store… 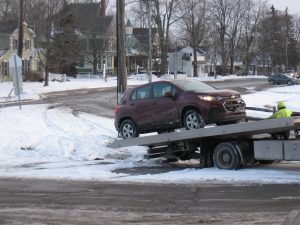