And Now For Another Exciting Adventure…

As it is now past Groundhog’s Day, it was certainly overdue for a change in our store’s front windows’s Christmas display. We had been putting it off since all the other stores on Main Street still had their Holiday lights on too, but about three weeks after New Years’ they all took them down at once like someone had written a memo. Well I didn’t get the memo, but I got the message, and the next Saturday we took down our decorations and put them away. The only problem is what to put up in their place. We don’t have an official window decorator (is that even a career any more?), but Mary Anne usually comes up with something. I just usually have to help make it fly (literally, this time). 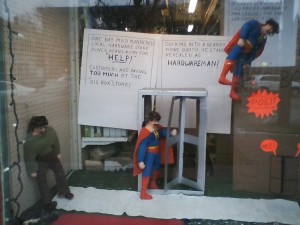 You see, it was now time for another exciting adventure of “Hardwareman”. Hardwareman was an idea that we came up with several years ago for our Fall scarecrow. Hardwareman looks a lot like Superman, but he has a big “H” on his chest instead and his secret identity is that of a mild mannered local hardware store clerk (sound familiar?). 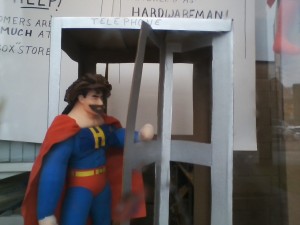 In this adventure Hardwareman is walking down the street, when he hears cries for “Help!” coming from the nearby “Big Box” store. Customers are trapped inside by high prices and poor service and it is up to Hardwareman to get them out. He ducks into a nearby phonebooth, and making his quick change, stands revealed as Hardwareman. He them flies over to the big box store and literally “knocks out” the competition. 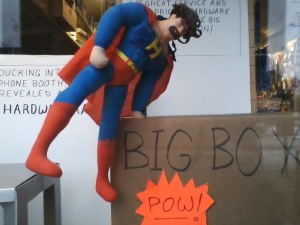 Mary Anne got Hardwareman to fly with the help of a little fishing line, but I had to create a phonebooth for him to change in. I made it out of a cardboard box and a little silver spray paint. I think that it came out pretty good. It did make me wonder though, these days when phonebooths are all but extinct, where does the real Superman change? Does he have to come all the way to the Old Hardware Store?