Well, it’s been a week or so since Ohio got it’s stay at home order from the Governor, but we’re still here. Hardware stores, of course, fit under the essential businesses clause in the business shut-down order. Folks may be sheltering at home, but they’ve still got to maintain that home. As I guessed earlier, I’ve sold a lot of toilet repair parts this week, as that is one of those home necessities (even referred to years ago as the “necessary room”). The other thing we’ve sold a lot of is paint, I suppose people are stuck at home and either can’t stand the same four walls any more, or possibly husbands have been telling their wives for years, “I’ll paint that bathroom as soon as I get the time…”. 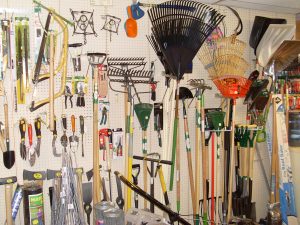 I had a day off this week and I managed to avoid both of those chores, but instead I started working outside on the garden. We may have to stay at home when we’re not working, but it doesn’t mean we have to stay inside. Instead I’ve started work on my own “Victory Garden”. If you’ve never heard of a Victory Garden, you are either too young for the reference or you fell asleep during the “Home Front” section of your World War 2 history lesson. Victory Gardens were a program developed in the U.S. And Great Britain during the war. Food was in short supply both because many of the rural men (and women) were in the service and no longer on the farm, and large amounts of food were being shipped overseas to feed both the fighting men and civilian refugees. 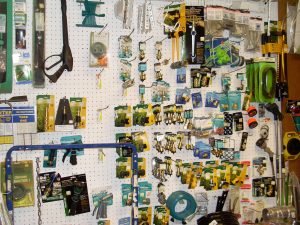 The idea was for every person to grow a garden on any plot of ground that they had access to. Young and old, city and rural, all citizens were called on to plant a garden in their back yard, nearby vacant lot or any available land. Every piece of fruit and every vegetable that you could grow, even if it was just a few, was something that you didn’t need to buy at the store and was thus available for the war effort. Everything at the store was being rationed anyway, so the food that you grew would help fill out the things that you could not buy. 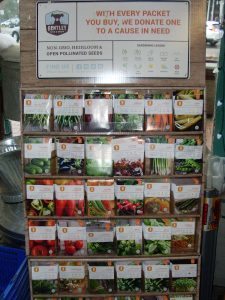 Hopefully things will not get that bad during this crisis, although there are lots of empty selves at some local markets. I just like to work in the yard anyway, and it seemed like a good time to get started. First I planted my early cold-weather seeds, like peas and lettuce. Then I used an old metal trashcan, whose bottom had rusted out to create a new small raised bed. I just used a jigsaw to cut off the bottom half of the can and then dug it into the ground so that its top stuck up about six inches. I filled it with dirt and then transplanted the smallest of the rhubarb plants from last year into it. You see, I had planted three bare-root rhubarb plants in a washtub, and while only two of them came up, one grew so large it nearly shaded its little brother out. In fact, I wasn’t sure that it had made it through the Winter until a single little leaf came up where it had been planted. I figured that it deserved another chance and so I transplanted it into the new bed. It was getting late by then, so I went inside and planted my tomato and pepper seeds into a starter flat. That way I’ll have seedlings ready to put out later when it warms up for good. 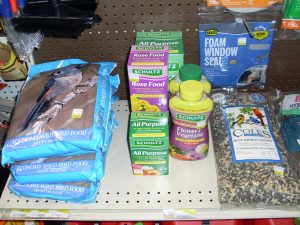 Now, I don’t want to panic anybody by suggesting that you will have to grow your own food to eat this year, but Gardening is a great way to get outside and treat that other epidemic that is going around, Cabin Fever. Also eating fresh fruits and vegetables is a great way to be healthy and build up your immune system , come what may. So remember, all of your Victory Garden supplies are now available, here at the Old Hardware Store… 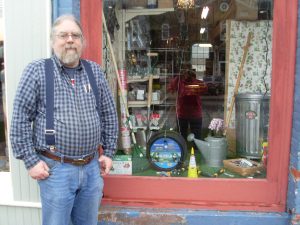