Off To The Woods Everything Old Is New Again…

This is the third time this Summer that I have run into tube trouble.  The first time I got a flat on my Massey Ferguson tractor while I was brush hogging the big field at our house.  The second one was on the little truck that I took to the antique power show.  Both of these involved jacking up the vehicle in question, breaking the tire off the rim, and patching the inner tube.  The most recent bit of tube trouble was a lot more fun and involved a big lake.  Yup, we finally made it out onto Lake Erie to do some tubing behind the boat. 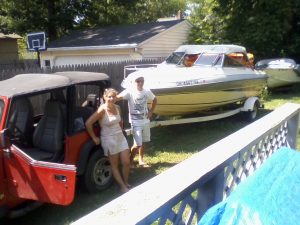 This all started last year when my buddy Lou decided that he wanted to sell his boat, which we had been keeping up at our cottage in Fairport Harbor, and get a new one.  He offered to sell it to me, and I used some of the insurance money I got when my Ford Escape got hit to buy it (I like to be practical like that).  I figured that we could use it for fishing and such, but Mary Anne had only one thing in mind, TUBING!  I had to admit that it would be a good boat for pulling a tube.  It is a 20’ Imperial with a Mercury V6 stern drive, plenty of power for speed, and big enough to take several people out tubing.

Mary Anne sprung for the tube and towrope set and then waited patiently for me to get the boat ready.  I had to clean it up and do several small repairs.  I then had to rig up a tow vehicle.  Unfortunately Lou’s truck was no longer available, and Mary Anne’s new Subaru just didn’t seem to be cut out for it.  That left my Jeep Wrangler.  It has way too short a wheelbase and is only a 4-cylinder, but I figure, “Hey, it’s a Jeep! It can handle it.”  Our friends Bernadette and Ben said that they wanted to come along, which was handy, as Ben knows about boats, and could help me out. 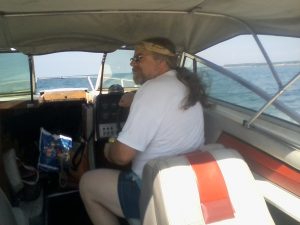 So we inflated the tube, hooked up the Wrangler, and headed out.  The Jeep did just fine (it’s all of three blocks) and the port authority boat ramps are set up pretty well so I didn’t have any trouble backing the boat down the ramp and into the water.  Then I parked the Jeep and trailer and went to get into the boat.  This was when the first problem became apparent.  In her enthusiasm, Mary Anne had purchased the biggest tube that you have ever seen.  When it is sitting on the boat, there is no room to fit anyone on there.  I squeezed in and everyone else had to balance the tube on the fantail until I could back the boat away from the dock.  Then we let it out on a short line and towed it out into the lake. 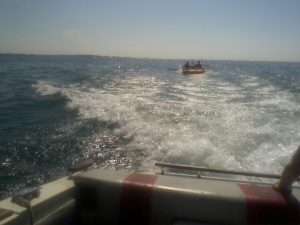 Mary Anne and Bernadette wanted to go first (or actually they were assigned as guinea pigs).   They got on the tube no problem, but as soon as I went to tow them, the tube dug in and flipped them off into the water.  They figured out that you have to hold the front of the tube up until it is going fast enough to begin to plane, and then it is stable.  I gave them a pretty good ride.  Then it was Bernadette and Ben’s turn.  They kept signaling for me to go faster and faster.  I even ran them across the wake a few times, but they stayed on the tube, no problem.  Then it was Mary Anne’s and my turn.  We did pretty well.  Ben gave us a pretty tame ride and that was enough for me.    They then took another turn and after that we headed back to shore. 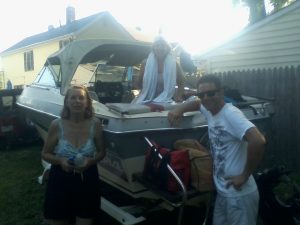 I got the boat on the trailer again and then we went back to the cottage.  This was the part I had dreaded the most.  Trying to back the boat into the narrow driveway and then into its parking spot between the fence and the house.  It took me a couple tries, but I finally got it approximately where it was supposed to go, and I didn’t even hit anything!  Well, it was a lot of work, but I really enjoyed taking the boat out.  Mary Anne wants to take it out again tomorrow; I suppose that is success, at the Old Hardware Store…