The weather service said that it was going to 95 degrees today, with a heat index of 107 (what the heck is a “heat index”?). I also heard that there is a “humidity alert” this week. All I know is that it’s hot, but it’s the end of July in Ohio, it’s supposed to be hot. That said, here is an indirect story relating to this Summer’s heat wave. So, I’ve had my “new” ’95 Jeep Wrangler about a year and a half now. It has never overheated or used any coolant, but a couple weeks ago when it first got over 90, we were driving back from Fairport and after a while the temperature gauge (thank the powers that be that it has one!) started to creek up towards the red. It didn’t actually overheat, but I knew that the cooling system needed attention, after all it’s only 24 years old. 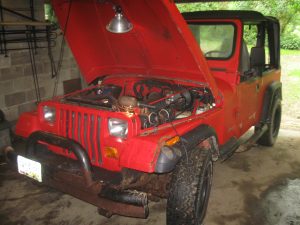 First things first, I checked the fluid level once it had cooled down. Nope, fluid level was up in both the radiator and the overflow bottle. I could not find any leaks either. I knew that the previous owner wasn’t a freak on maintenance, and the coolant looked pretty brown (always a bad sign, it should be yellow), so I figured a flush and some new coolant were the first things to try. I got the radiator flush and antifreeze from Hill Hardware (where else?) and waited for a day off. Last Friday I wasn’t working, so I scheduled the job. First I drained the old coolant from the bottom of the radiator. It came out pretty dark brown. I then went to refill the radiator with water and the flushing solution. It said to refill and then run at normal temperature for 15 minutes. I started the Jeep, but as I waited for it warm up, it ran right up to hot. I let it cool, checked the radiator (still full) and tried again, another overheat. Rats! 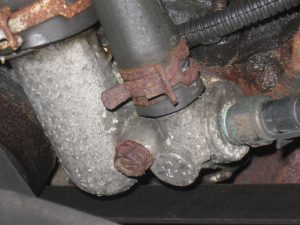 The radiator was still stone cold, but the engine was overheating. This told me that the thermostat was plugged up and not allowing the engine to fill with the flushing solution. I was out of time by then, so it sat until yesterday when I had time to look at it again. I ran up to NAPA and got a new thermostat and gasket and then drained the cooling system again. There was a little fuss getting the thermostat housing off the front of the engine, but at least with a jeep I could get to it. One of the bolts was inaccessible behind the serpentine belt, but once I got that loose, the bolt came right out. Sure enough the old thermostat was the Chrysler original and the bleed hole was packed solid with gunk. You see the bleeder is an air vent that allows the air in the engine cooling passages a way to get out when you go to refill an engine with coolant. With it clogged, the radiator will fill and not the engine. Just what the symptoms suggested. 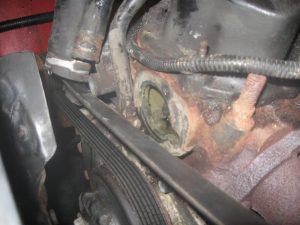 I thought that I was in like Flynn, but when I took the new thermostat out of its box, it had no bleed hole at all! A quick trip back to NAPA confirmed that the thermostat that they gave me was the right one. They said that it should work fine, but I wasn’t convinced. A thermostat without a bleed hole would work just like one with a blocked hole, meaning that it wouldn’t. I was committed now though, so I went back home and got to work. I toyed with the idea of just cleaning out the old thermostat and putting it back in, but that seemed like it would just be delaying the inevitable. I also considered putting the new thermostat in and trying it that way. I had heard about bleed hole troubles from other folks before and I decided just to cut to the chase. I’ve got drills, I’ve got a drill-press, make it happen. So I just chucked up a drill and put in my own bleeder hole. 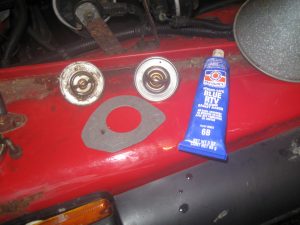 To keep from clogging up the new thermostat, I bolted the housing back on empty and refilled the engine with the previously drained flush solution. After a 15 minute run and the required cooling time, I drained the flushing solution (which came out looking like ol’ muddy) and put the new thermostat with it’s freshly drilled hole back in. I then filled the radiator and overflow tank with a fresh 50/50 mixture of new antifreeze. It took a lot more this time, indicating that the engine was filling too. A short test run showed that the engine was running plenty cool. The real test would be a longer run on a real hot day. I’ll just have to take it up to the Old Hardware Store… 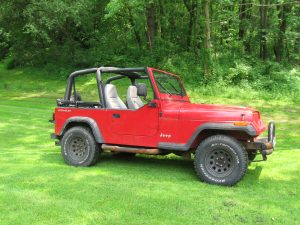