Well it seems that Fairport Harbor is the happening place this Summer. Last week we had the Fairport Mardi Gras, and this week we had a visit from the Tall Ships tour. “Tall Ships” are the old-time sailing ships such as schooners, barks, brigs and full square-rigged vessels. It wasn’t that long ago (about a century) that large sailing ships were still a common sight in coastal towns, but now working sail is as rare as hen’s teeth. The Tall Ships tour is a voyage around the Great Lakes by several vintage and reproduction sailing ships that you can see, tour and take rides on. They usually stop in the port of Cleveland, but this year’s RNC schedule conflicted with the tour so they stopped in Fairport Harbor instead. 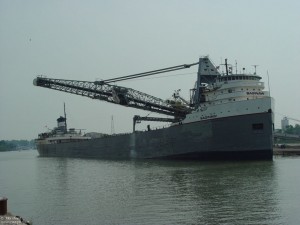 For those of you that haven’t been there, Fairport Harbor’s harbor is sort of like a mini Cleveland. There is a breakwater around the mouth of the river (the Grand River instead of the Cuyahoga) and up the river there are port facilities for the big Lakers. While not as busy as Cleveland, Fairport gets its share of the big 800 foot bulk carriers, bringing in gravel and sand, and taking out salt from the Morton mine under Lake Erie. It is pretty interesting watching them back a huge freighter into the river, and then unload the cargo onto the dock with big power conveyors. They them load them back up at the loading station in the river and they’re off again, often in less than a day. There were no freighters in Fairport this weekend, leaving the dock space open for the sailing ships. There were several types of ships in attendance. I’ve read up on the various barks, brigs, etc., but I still couldn’t tell you definitively what they all were. It all depends on the various combinations of the number of masts, and the fore ‘n aft and square sails that they mount. If it has all fore ‘n aft sails and it has two masts it is usually a schooner, if it has square sails that go from side to side on it’s front mast, it’s a bark and if it has square sails on all it’s masts, it’s a “ship” (I thought that they were all ships!). There are many permutations of this nomenclature, and some of it is subjective, so don’t quote me on any of this. We didn’t go on any ship tours, but we had fun having an ice cream cone and watching the ships from lighthouse hill. We had some friends over and later we cooked out on the grill. It was a pretty good time. We are going up to Fairport again this weekend. There’s nothing scheduled to go on, so I figure the beach shouldn’t be too crowded. Of course the forecast says 90 degrees and sunny, so I wouldn’t bet on it!