Well I finally had some luck catching fish. Unfortunately it was during a “Fish Pond” game with my grandchildren, Owen and Clarabelle. They had their first solo overnighter at our cottage in Fairport Harbor a couple weeks ago. They are pretty good kids and we had a lot of fun with them. 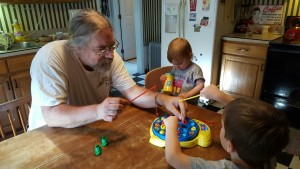 As you know if you’re a loyal reader of my blog, We’ve been having miserable luck fishing out on Lake Erie this year. It’s been too rough on a few days, and at other times they just weren’t biting. Well I’ve finally found some fish that I can catch, they are the plastic ones in the Fish Pond game. As you play the game, the fish go around in a circle and open and close their mouths while you try to “hook” them when their mouths are open.

I got pretty adept at hooking the little guys and hauling them out at the proper moment. Owen got the hang of it too, but Clarabelle liked to just put her fingers in their mouths and just pull them out. Hope she doesn’t try that with real fish when she is older! 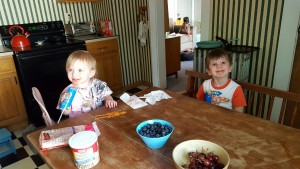 We took them to the beach and while Owen went in to swim, Clarabelle was happy to just play on the beach, First I would make a sandcastle then she would smash it… you get the pattern here. We also made sugar cookies at the cottage for their Dad. The secret is to keep them busy so they wouldn’t bet bored and cranky. Of course by the end of the weekend we were exhausted ourselves and more than ready to hand them back over to their parents.