It Was Wild! Steam’s Up

Last time I wrote about our great trip down to Cass, West Virginia to ride the Cass Scenic Railroad. Of course we rode behind (or in front of) the steam locomotives. These were special logging locomotives called Shays, after their designer. While I touched on it last week, I would like to explain a little more about how these and other steam powered machines helped make the dream of logging in the mountains into a reality. 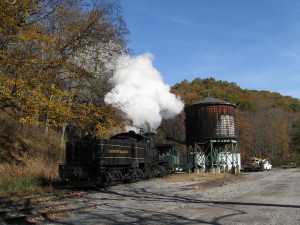 Steam powered locomotives were invented in the early nineteenth century and by 1850 or so were pretty well developed technologically. They were safe, fast and fairly reliable as long as the could be run on a straight level, well-laid track. Unfortunately logging tracks laid into the mountains were anything but this! They were steep, curvy, bumpy and lightly constructed, after all, they were only temporary. They were meant to be used for a few years and then torn up and moved over to the next mountain. This made regular main line locomotives completely unsuited to logging service. As they say though, necessity is the mother of invention, and it was only a matter of time before someone (Ephraim Shay) came up with a better mousetrap.

What made these Shay locomotives different than a conventional design? They had the same three basic components, boiler, engine and drive wheels. The difference was in the engine’s layout. A standard locomotive has the boiler on top, with the engine’s pistons on either side at the bottom. The pistons drove the large drive wheels by way of connecting rods. These transferred the power to a row of large diameter drive wheels on each side. This was very efficient, but it was much too long to be able to follow the curvy, uneven track found in the mountains. Mr. Shay came up with the idea of carrying the locomotive on sets of pivoting trucks, just like a boxcar. This allowed the wheels to follow the irregularities in the track. 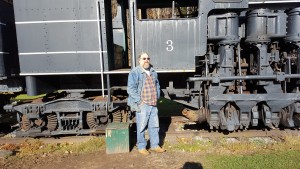 This left the problem of how to drive them. Shay moved the boiler over a little to one side, to make room for a vertical engine mounted on the side of the locomotive. This engine then powered the wheel trucks by way of drive-shafts running along one side of the locomotive near the bottom. These drive-shafts in turn, powered the wheels by way of a set of beveled gears at each axle. This allowed all of the wheels to be driven giving great traction. Sort of a nineteenth century steam powered jeep, if you will. These engines were actually built at the Lima Locomotive works in Ohio, and were shipped all over the world. They say that imitation is the sincerest form of flattery, and several other designers copied the idea of the Shay with logging locomotives of their own, notably the Heisler and Climax types. 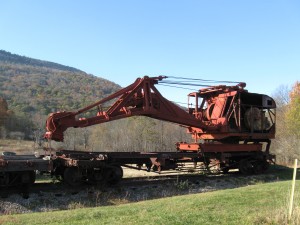 Don’t get the idea that steam power was only used for the locomotives in those days either. Once the logs were cut, they had to be dragged up (or down) the mountain and then loaded onto the train cars. Steam powered cranes mounted on flatcars were used to load the logs, and great steam powered winches were used to run a high-line. This entailed setting up a great mast at a central location, and then stringing a cable to near where the logs were located. A pulley was then set up on the cable and a second cable attached to it. The logs were then chained to the pulley and it was winched along the cable to the collection point, where they were unloaded to await the train. Once down the mountain they were sent to the steam powered (of course!) sawmill to be turned into lumber to feed the demand of a growing nation. That’s about it for steam power at Cass, but there will be more from our trip next time, at the Old Hardware store… 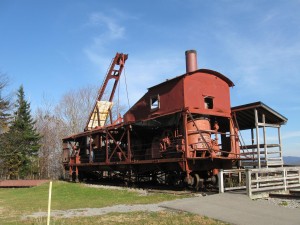