Now that I’ve covered the railroad potion of our trip down to Cass, West Virginia, its time to cover the other cool thing we saw. I was perusing the pamphlets at the West Virginia welcome center (as I always do as we travel). Among the fliers pushing Gravity Hill and the world’s only Moth-man museum I noticed one that looked interesting. It was for the West Virginia Wildlife Park. I thought that Mary Anne would be interested in it and it was not too far from our route on the way home. 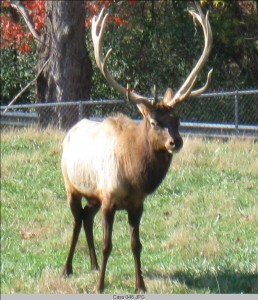 We took one of my famous “shortcuts” (no smart-phone for me!) across the mountains on a very secluded winding road. The houses were nice at first, then we passed some more dilapidated looking trailers. About the time we passed a closed coal processing plant we began to get worried. Then suddenly we came back to civilization and there was the park. 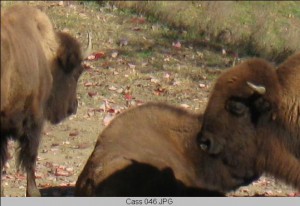 The Park was run by the West Virginia Game Commission, and was similar to a zoo, except that all of the animals on display were native to the area. Some of them like the bison and wolves are no longer found in the state, but they were there once and may be re-introduced in the future. It was a nice park, with paved trails running through the woods, passing large outdoor runs where the animals lived. We saw bison, elk, bear, wolves and several others. In the mountain lion run, I got as close a lion as I have ever been. There were also birds up in the trees, but we could not find the fisher (a sort of arboreal mink) in his pen. 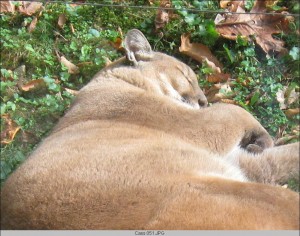 After we saw all the animals, we had our lunch sandwiches in a very nice picnic grounds that they had there. Then it was back in the car to come home. All-in-all, it was a very memorable trip, and we both had a great time and it was one of the best birthday celebrations that I have ever had.