Old Time Christmas It Was Wild!

We’ve been getting set up for the Christmas season at the store, and one of the things on the list that needed tended to was the empty steam toy display case (it wasn’t really empty, but we were running perilously low!). Rectifying this problem involved a telephone call to the good people at the Jensen Steam Engine Company in Jeannette, Pennsylvania. They advertise themselves as the world’s oldest manufacturer of model steam engines, and they are as far as I know the only one left in the U.S. 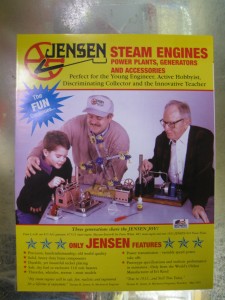 They have great customer service there and when I called one of the items that I wanted was an electrically heated Model 25. The lady on the phone said “ Oh, I think that we are out of stock on those.” Then she called to fellow in the back, “Hey, can we build an electric “25” to go out in today’s UPS?” I heard a few mumbles from the back and she replied ,”No problem we’ll ship it out today.” I thought, yeah right, but sure enough the Model 25 showed up the next day, along with the other two engines that we had ordered. Now that’s good old American service! 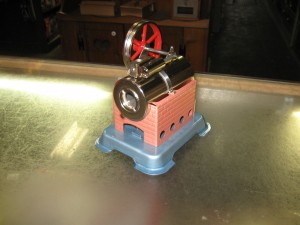 The engines that we got included a Model 85, which is a simple, though powerful oscillating engine that is good for a beginner. It still is a real steam engine though. You have to fill the boiler with water, checking the level with the boiler sight glass. Then you have to load the fuel tray, light it and place it into the firebox under the engine. While you are waiting for steam to build up is a good time to oil the engine. A drop or two on the piston pivot point and piston itself, and an occasional one on the axle bearings does it. When steam pressure is up, a gentle push on the flywheel sets her off spinning. What fun! 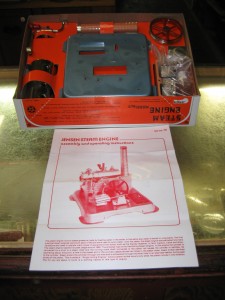 The Model 76 kit was the next largest engine in the shipment. It is a screw together kit that after a couple hours work produces a larger model with the engine realistically mounted on the base-plate next to the boiler. It also features a whistle and steam throttle to control the speed of the engine. Like the others, the Model 76 can be used to drive a variety of model tools and accessories, available separately. It can also be used to drive Erector Set type models of your own construction. 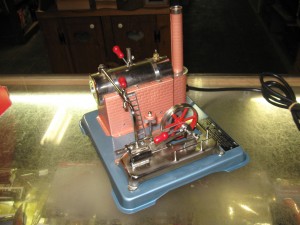 The final engine on the order, and the one causing all the consternation was an electric Model 25. The model 25 is the largest and most complex engine in Jensen’s hobby series. It’s an “electric” because instead of heating the boiler with heat tablets, it features an electric heater that you just plug in. It isn’t quite as authentic as a real fire, but it will run the engine longer and saves the cost of the fuel. The model 25 does feature the most authentic steam engine though. It has the whistle and throttle of the smaller engines, but it also has a slide valve double-acting engine, and it reverses with a switchable Stevenson Link, just like a real locomotive!

All of these engines are carefully handmade of metal and wood in the good ol’ U.S.A. With a little care they will last for several generations. The original steam engine that my Dad got me for Christmas one year is going on 45 years old and is still going strong. So if you are looking for a unique Christmas gift to share with your children (or grandchildren!) stop in at the Old Hardware Store and check them out…