Last week I talked about the new Jensen steam engines that we just got in for Christmas, well we’ve finally caught up with the calender and decorated the store windows for the season. Our trusty snow men (people?) are in one side and Mary Anne set up a Christmas tree in the other. I got out some of the toys from my youth to set up around the tree, just like the old days. 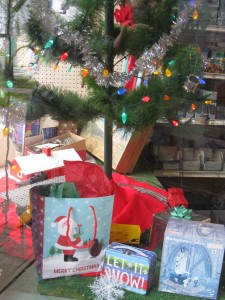 I set up my original 1960’s Lionel train around the tree. It was just a basic set, but later on I got my older cousin’s set to add to it, so I really had a railroad empire. I used to set it up in our living room and my Mom and Dad had to step around my track until it drove them crazy enough that I had to put it all away. 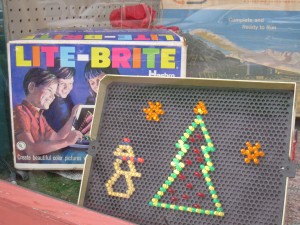 Mary Anne got out the old Lite-Brite and composed a Christmas scene. I actually never had a Lite-Brite when I was young, but I always wanted one. I got my chance a few years later at a garage sale and I nabbed it. Of course there are problems with using vintage toys in the front window, people think that we still sell them. As soon as we put the Lite-Brite in the window someone came in and asked if we had pegs for them! 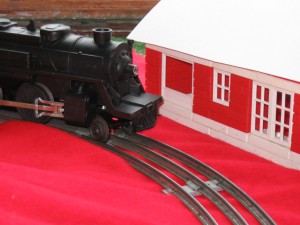 I loved building sets in my youth ( I still do!) and one of the fun things to do is to get out several toys and use then together. This being said, I built a station for the train out of my American Building Bricks set and then constructed a bridge over the tracks with parts from my Erector Sets.

I don’t know if children today get into construction toys the way I did in my youth. I had wood blocks, Legos, Lincoln Logs, Girder-matic, Super City, American Building Bricks, Erector Sets and more. I think that playing with them might have gotten me interested in Engineering to start with and might be responsible for where I am now. Today all I see kids play with are blocks and then maybe some legos, then they get sucked into the virtual world of video games and while they can be fun, I don’t think that they provide as much mental stimulation and hand-eye coordination training as I got from construction toys. Oh well, I guess that you can’t bring back the old days, unless of course you visit the Old Hardware Store…