The Skinny On Floodlights

Well now that we’ve gotten about a foot of snow on the ground here in Burton (at home, 5 miles South as the crow flies, we’ve got about an inch – they don’t call it the snow belt for nothing!), Winter weather is certainly here. So, of course, it’s time to talk about floodlight bulbs. Floodlight bulbs? Well let me explain. Winter is floodlight bulb season, not officially of course, but it’s when we sell most of them.

The most common usage for floodlight bulbs is outdoor lighting around the home. It’s this time of year, when it gets dark early that people need their outdoor lights the most. We’ve got them mounted on the side and back of the house and they are handier than socks on a rooster when you’ve got to do something outside after dark.

When you turn them on for the first time in a while, that’s when you’re likely to notice that your floods are no longer working and you need a new bulb. It’s time for a trip to the hardware store!

Of course these days with the government in the lightbulb business as well as many other things, it’s not quite that simple. If folks come in and want a simple replacement for their old 100 watt incandescent flood light I don’t have them anymore. They were included under the banning of regular incandescent household lightbulbs a few years ago in the name of efficiency. The closest that I have is a high efficiency quartz floodlight that is equivalent to the old bulbs. They’re pretty good, but they’re not as bright and don’t last as long as the old bulbs (they’re more expensive too, but what isn’t these days?).

There are a few alternatives available. They still produce a 65 watt incandescent flood sold as a “security” bulb. I don’t know if it is the wattage or the “security” designation, but they were spared when the other bulbs were phased out. Until recently we also had compact fluorescent floodlights, they have the now-familiar squiggly tube inside a glass reflector envelope. They were pretty good, efficient and long lasting, but they seem to be getting rid of those as the next contender, LED’s, are coming in.

LED’s have developed quite a bit over the last few years, and now are available in both inexpensive indoor and more expensive outdoor types. They are tops in efficiency and while their prices have come down a lot, they will have to last their entire rated life to make them worthwhile. The best outdoor floods that I carry are rated to last 22-1/2 years! I’m not sure how you’re supposed to keep track of that (am I the only one that marks the installation date on the bottom of the bulb with a Sharpie?). It’s not that I’m cheap (well, okay I am cheap, but that’s not the point), I’m just curious to see how long they last. 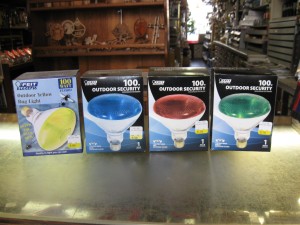 It’s also the holiday season, and lots of folks like to light up the front of their homes with colored floodlights. We have those too, still available in good ol’ incandescent. Colored bulbs also include yellow anti-bug lights for the Summer, but they don’t move very much this time of year. Spotlights are also available. The difference between a flood and a spot, by the way, is that floods throw a wider beam for area illumination, and spots a narrower beam to light up a specific feature.

So why this missive? As the snow was falling yesterday, I checked the weather and saw that the projected lows for next week were in the single digits. For us at the farm in Troy that means it’s time to turn on the floodlight in our well house that provides the heat to keep the pipes from freezing. Of course once I wrestled the cover off the top of the well house and crawled down inside, the bulb was burned out (see above). I didn’t have the spare bulb that I’m supposed to keep in the closet, all I had was a compact fluorescent flood. Lots of light, but no heat. I brainstormed and decided that I could swap the CFL with one of the old incandescent floods on the back of the house. It worked, but I’ve still got to get a spare new bulb, at the Old Hardware Store…