I hate to write about the same thing too often, but I figured that this would be OK, as it was way back in June that I detailed my last fishing trip up on Lake Erie. As a reminder of how it went, let’s just say that it was underwhelming. Even though the walleye have been having a bang-up year, we didn’t get a single bite. I’ve been wanting to go out again ever since, but we have been too busy. We did get to take my boat out for tubing a couple times (see “Tube Trouble” from a few weeks ago) but Mary Anne isn’t very interested in fishing, so it’s up to me and my friend Lou. Lou’s been busy too, working on his new house in Geneva, but we finally made some time to go out last week. 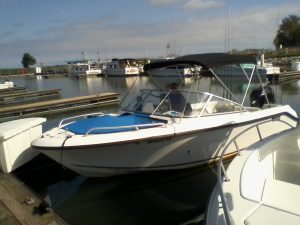 We took Lou’s boat again and the weather was perfect. It was mid 70’s and sunny, not bad for early October. The walleye had moved way out from shore and we didn’t want to go out that far, so we fished for perch, which are right inshore and were supposed to be biting. Perch aren’t as big as walleye, but they are also good eating, better, some say, than walleye and you don’t have to troll for them either. You just have to find a school of them that are biting and drop a line down near the bottom. 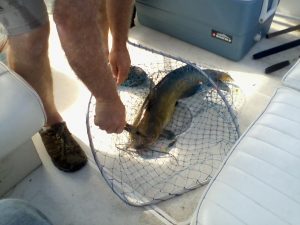 We did just that, and were soon rewarded with a couple good sized perch. Late in the season regular perch get bigger and are called “jumbo” perch (same fish) and these definitely qualified. We had caught a few more, when all of a sudden ZING! I got a bite and something big took off with my line. I had to play him quite a bit. I would let him run until the line went slack, reel him in a little, and then, zing! he would take off again. After a few minutes, I had him at the surface and Lou got the net. It tuned out to be a huge catfish and we got him into the boat after a couple tries. We got a picture and I put him back into the water. You can eat catfish, but we were counting on perch today. 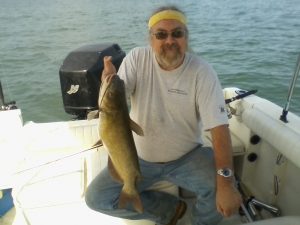 It’s possible that we should have kept him, as we ended up getting two more big cats before the day was over. As well as a couple sheep-heads, a white bass (both throwbacks) and about 15 perch total. Lou even ended up with a walleye, though it was only about 6” long, I was surprised that he could even fit the hook in his mouth. It was a pretty good day, and we were both satisfied with the fish we got. Lou was going to fillet them, eat some and then freeze up the leftovers. That may be our last trip of the season, and I suspect that we are done with tubing also. Time to think about winterizing the boats, and planning for next year. All in all it was a lot of fun, but it’s time to get back to work, at the Old Hardware Store…