Something’s Fishy A Little Too Salty

Some folks that came into the store this week noticed that I was away for a few days. A few asked if I was on vacation and I replied, “Not really, it was a family thing.” What it was actually was a trip to our nation’s capitol to go to Arlington National Cemetery for the internment of my wife Mary Anne’s Aunt and Uncle, Lorraine and Chuck Winn. I had met them when we stayed at their home in Florida a few years ago on vacation. Mary Anne was very close to them from her childhood on, and we really wanted to be there for the internment. 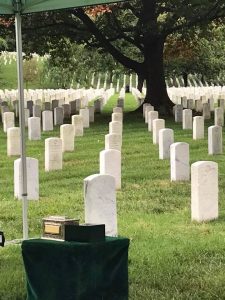 If you aren’t familiar with Arlington, it is the main national military cemetery located just across the river from Washington D.C. How it got started was actually a little odd. Before the civil war, it was the estate of Robert E. Lee, yes that Robert E. Lee, commanding General of the Army of Northern Virginia during the American Civil War. It ended up in Union hands early in the war, and because Lee was fighting for the South, they took ownership and began to use it as a burying ground for some of the many soldiers that were dying in that conflict. In the 150 years since, it has grown to become the final resting place of over 400,000 men and women, most of them veterans or other notable persons. 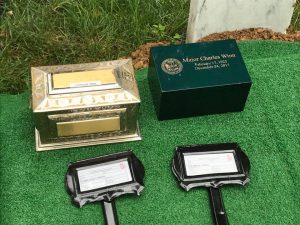 When first started most burials were soldiers directly from civil war battles, but as time passed, older veterans who died later chose to be buried at Arlington to be with their fallen comrades. Over the years, requirements have tightened on who can be be buried at Arlington, but Mary Anne’s Aunt and Uncle certainly qualified. Her Uncle Chuck, served in World War 2 and then again in Korea. During the Korean War he was captured and spent almost three years as a prisoner of war. After he was finally released, he continued to serve and finally retired with the rank of Major. While his wife Lorraine could go to Arlington as his spouse, she certainly deserved it in her own right as she studied nursing in an Army sponsored program to prepare nurses for service in military hospitals. The war ended before she completed the classes, but she performed practical training in a military hospital full of wounded G.I.s. 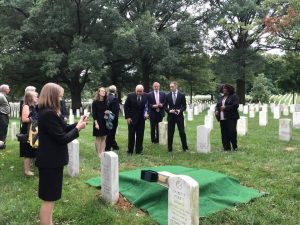 The ceremony at Arlington was very impressive. Once we were checked in at the gate, we drove to the administration building and there we met up with the other relatives and friends who had come into town for the service. We were met by our guide and by the Army chaplain who was to officiate. We then drove to where the internment was to take place, where we were met by an Army band, rifle squad and honor guard. The service was not long, but very touching. They were prayers, music, a 21-gun rifle salute and the flag folding ceremony. 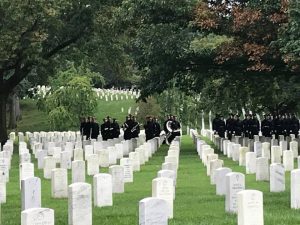 The only tense moment came when there was a weather related incident. It had rained a little before the service, and when the wind gusted a little, rainwater that had pooled on the canopy drained down in a river right on top of one soldier’s head during the flag ceremony. He was such a professional that he didn’t even flinch, and finished the ceremony like nothing had happened. After the ceremony, the solders formed up, and marched out of sight over the hill. We thought that it was a very touching and respectful service.  We had a nice luncheon afterwards in the city, and then everyone started on their way home. We were staying over with my sister Linda’s family in Maryland, and we headed home the next day, back to the Old Hardware Store…