A Grateful Nation More Stuff New To You

A Little Too Salty

When it comes to taste, my wife Mary Anne prefers sweet, while I tend to like salty. Well, I used to think that nothing could be too salty for me, but I may have met my match. I was driving my Ford Escape (the wrecked one) to the store a few weeks ago and I started to notice that it was making a loud rattling noise whenever I hit a bump in the road (rare around here – NOT!). I figured that it was just some of the tools and general junk that I like to haul around with me everywhere I go. I put up with it for a few days, and then I finally bit the bullet and cleaned out the back of the wagon. I went to drive it the next day, expecting it to be much quieter, but it was just as loud as ever. I finally stopped and took a close look at the car and found much to my display that my passenger’s rear top shock mount had ripped right out of the car! It was not a result of the previous accident damage (although I’m sure that it didn’t help) but of rust caused by all the road salt that they use around here in the Winter to melt the ice and snow. 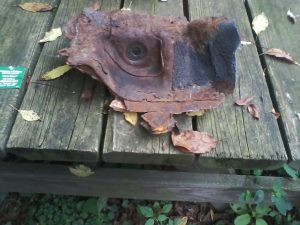 I like this car, but it has a few shortcomings, one is that that there are no inner wheel well liners in the back (front has them, but not the rear) and the other is that it is constructed of very light gauge sheet metal. These two things, working in conjunction with each other, caused the failure. They tried to avoid this at the factory by reinforcing this spot with a triple layer of metal at this point, but it just failed instead at the edge of the reinforcing plate all the way around. I thought about fabricating my own patch for this mount, but it is a very oddly shaped area and fabricating it would be pretty difficult. I decided to check U-tube to see if anybody else had had this problem. Spoiler alert, if there is a dedicated U-tube video about your particular problem, it’s pretty common. Not only did they have a video on the procedure, but they said that there was a ready made inner fender patch available for this repair. It wasn’t cheap, but it would save me a lot of time, so I ordered one. When it came in, I set aside a day off to get it done. 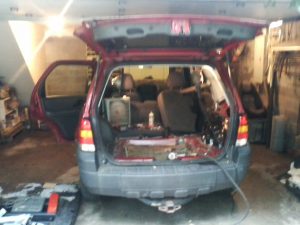 The first I had to do was to strip the interior panels out of the back of the car. This was easy as I had just done it last year to repair the body damage after the last accident. Then I had to remove the remains of my old patches, and remove the broken fender mounting remnants off the top of the shock. Then I had to trim the new patch as I did not need the front end of it, and it would make the installation more difficult. I then had to trim the patch to fit (they are a one-size-fits-most kit) and not all the cars are the same and mine had been previously bent a little bit to boot.

Once I had a good fit, I used about a zillion drill screws to fasten it onto the car’s remaining sound sheet-metal. Then I added a few angle braces to the floor near the shock mount (if it’s worth doing, it’s worth overdoing). When I was finished I ran a bead of silicone caulk around the repair. I bolted the shock back onto the new fender and then I re-assembled the interior. It took me about four hours. Not too bad, but I’m a little sore from spending so much time hunched over in the back of the car. I must have done a good job, as it seemed eerily quiet this morning as I drove it to work, at The Old Hardware Store… 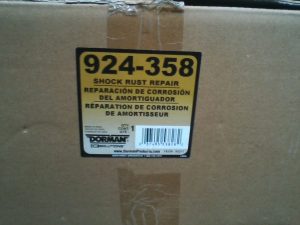