Now that Winter is here (with a vengeance), my wife, Mary Anne, thought it was time for some Winter sports. I don’t ski or snowshoe, but I’ve been known to sled in my time. When I was younger that usually meant driving somewhere. There were hills near our house, but most of them had trees on them and hence were too dangerous to sled down. One that we did go down was around the corner from our house at Waterson’s. Yes that’s Waterson as in Calvin and Hobbs. They lived on the next street from our house, and they had a huge hill in their back yard. It was obviously the inspiration for the sledding and wagon riding themes from the Calvin and Hobbs comic strips. 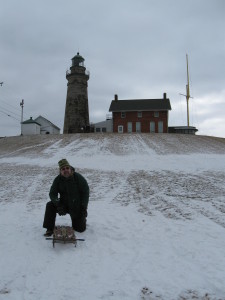 This time we went sledding on the hill by the lighthouse in Fairport Harbor. Our Grandson Jamie went with use and we had quite a time. There was not a lot of snow on the hill, as it had mostly drifted away in the high winds, but there was enough for sledding. 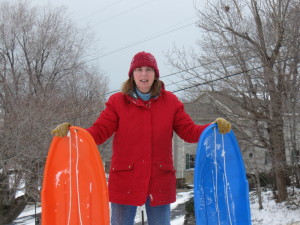 Jamie brought his modern plastic sleds to use, but I brought out my secret weapon, the Champion GTO. The GTO is a runner sled that my parents got me when I was about 10 years old. I’ve had it ever since. I had to wire brush the runners off, as they had gotten a little rusty, but they cleaned up just fine. I waxed them with a candle, and we were off. 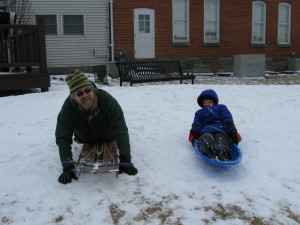 The new plastic sleds went OK, but they don’t steer worth a darn. If you can’t steer your sled on the Fairport hill, you end up going over the concrete steps at the amphitheater at the bottom of the hill. Believe me, it’s better to use the runner sled which steers like a dream and you can go around them. We sledded for an hour or so, and the old GTO held the record for the fastest and longest runs, I guess that you just can’t improve on some things…