It’s not quite March yet, but this weekend Pancake time will begin in Burton. The schedule had been complicated this year because Easter is early, and will fall on the last Sunday in March. That will put it in conflict with the last traditional week of Pancake season (how dare they!). To make up the lost week, the pancake venues are split between starting early and continuing into April. We will be open from 11:00 to 3:00 on the first three Sundays in March. Sundays in March are special, not just because of pancakes (like that wasn’t enough!), but because of steam. I’m not talking about the cloud of steam rising from the Burton Chamber of Commerce’s log cabin sugar camp, although it will be there, I’m talking about Spring Steam-up at Hill Hardware. 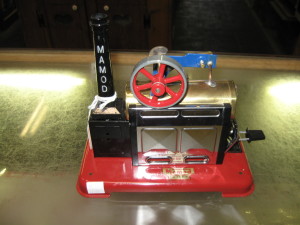 If you didn’t know, along with hardware, housewares and sundries (maybe they fit under sundries) we also sell toy live steam engines. These classic toys of yesteryear are still made in the U.S., Great Britain, Germany and in other countries around the world. They work just like real full sized steam engines, you put water in the boiler, oil up the engine, and light the fire under the boiler. Soon enough they spin into action chugging along at a surprising speed. 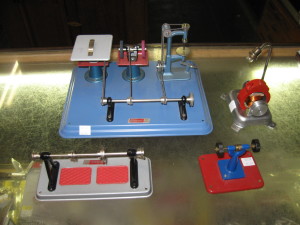 Just watching them run is entertainment enough, but sooner or later most miniature steam enthusiasts want something more. This is where you can get creative. Most toy engine manufacturers can supply a line of miniature machine tools and novelties to drive with their engines. Small belts are set up to a line shaft that can be used to divide the power up between different tools, different pulley sizes can be used change speed and torque available, and it all can be screwed down to a simple or fancy base plate.

Replica vintage tin-toys such as carnival rides and animated workmen are also produced. One of the most fascinating accessories is probably the generator set. The generator, when belted to the engine’s power takeoff pulley produces enough electricity to light a small flashlight bulb. Talk about a lesson in Physics, the chemical energy in the fuel is converted to heat energy, which produces the steam, which drives the engine, giving mechanical energy, which drives the generator, producing electrical energy, which lights the light bulb, producing light energy. Explain that to your curious child, if you can.

If you are interested in all this, be sure to stop by the store on pancake Sundays next month, along with our usual items for sale, we will be running a demonstration toy steam engine, set up to drive an assortment of miniature tools for your perusal. This kind of high quality entertainment can only be found – at the Old Hardware Store…