It seems like sometimes I just have the luck (bad that is).  I suppose that everyone feels like that sometimes, and this week it was just my turn.  I wrote before about my buddy Lou’s new fishing boat up in Geneva.  It’s been running fine since we played musical batteries in it a couple weeks ago, and they’ve been taking it out fishing regularly.  I finally got a day off last Tuesday and we made plans to go. 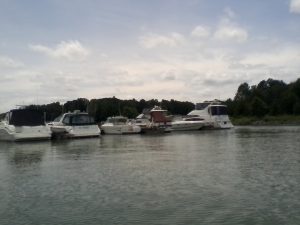 You kind of have to play it by ear with Lake Erie.  Bad weather can come up fast and it is no place to be caught out on in a small boat.  The forecast was good though and we were on the water by 9 o’clock in the morning.  The walleye have been biting really well and Lou went out and got his limit several times the week before.  We set up for trolling, which is one of the standard ways folks catch walleye around here.  To troll (not the internet kind!) you set up several rods in holders on the back of the boat and then you put lures on the lines to attract the fish.  Then you pay out a set amount of like (the reels have counters on them) and then you drive the boat slowly to have the lures “swim” in formation until the fish get interested.  Of course you can imagine that this can be a recipe for the mother of all tangles.

This is where the “divers” come in.  Divers are small plastic line guides that you clip on the line near the lure.  They make two different kinds.  Jet divers that look like miniature jet fighter planes that pull the line down to a preset depth, and Dipsy divers, which look like flying saucers, that do the same, but can be set to run the line to one side or the other also.  The idea is to use the Jet divers run the two center lines straight back and then use Dipsy divers on the outside lines to pull those lines out to the sides so that all the lines don’t get tangled.  It took a while to get everything set up right, but soon we were trolling with the best of them. 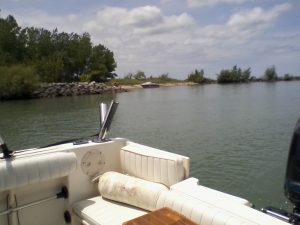 That was when we figured out that we were in trouble, no bites.  We trolled for a while, we tried casting for a while, and then we went back to trolling.  No matter what we tried, the fish just weren’t biting.  There were several boats out, but nobody seemed to be having any luck.  After about four hours we gave up and came in.  We figured that the big run was over and we had just missed it.  I went home pretty dejected.  Lou went out again a few days later, and I hate to say it but they were biting again and he got several nice fish.  He called me and said that they decided that it was just me, I was bad luck!  I guess that’s OK, I had to go back to work anyway, at the Old Hardware Store… 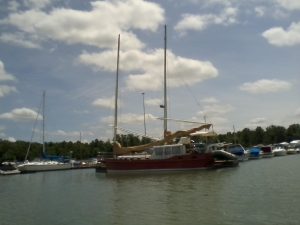