A few weeks ago I ranted and raved about keys, this week it’s telephones. Our main phone line went out this week and that’s what got me started. I remember an old comedy record (that’s right, an LP) that I listened to years ago that said something to the effect that while there were many things wrong in the U.S., at least we have really good telephone service. It used to be actually true, those were the days of my Mom’s old black rotary desk phone that sat in the dining room, with its CHestnut-7 (Chagrin Falls’ exchange) sticker in the middle of the dial. She got it when they built the house in 1959. She still has it, and it’s always worked! I’ve lost track of how many times it’s been pulled off the counter by its a-little-too-short handset cord, BANG! and you just picked it up and put it back on the counter and continued talking. The phones today – all you have to do is look at them wrong and you get disconnected. 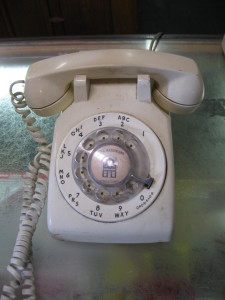 Of course that was when all you needed was one house phone to be considered up to date. I remember when you saw someone on TV with a second phone next to the bed in their bedroom you thought “They must be rich”. Then my Dad went and hooked up a second phone in his basement “Radio Room” (he was a Ham) and I thought we were really up there.

Then came cordless phones, which were (and still are) just corded phones without a cord. Handy, but you were always breaking off that FM radio style antenna from the top. Later I remember the first satellite phone I ever saw. A guy had it in a bar and it was the size of one of those walki-talki radios that you saw the Sargent calling in artillery support with on “Combat”. Pretty soon they became smaller and changed from satellite to cell phones, and that was the beginning of the end.

When cell phones came out they started to change the way people felt about being “in touch”. You now have to check in with everybody regularly or else something might be wrong. It also invented what I like to call the “Yes there has been no change of plans” phone call. Say you’re supposed to be over at your friend’s hose at 6:00 Tuesday for dinner. It’s 5:45 and you’re in the car on the way over you are supposed to call and say “Hey, we’re on the way over.” Of course you’re on your way over, if you had a problem you’d call. Now if you don’t check in all the time you’re being rude. I also love those people with the little Star Trek things always in their ears. When I was a kid if you saw someone walking down the street alone talking to themselves your Mom would say “Stay away from that guy, he’s got a screw loose”. Now he’s just ordering Pizza or something – maybe.

The real end came with “smart” phones. Now not only can people talk to each other all the time, but they can shop, surf the internet or who knows what all else while they’re supposed to be doing some thing else – like driving for instance! They have done a million government studies that all say that talking on your cell phone while driving is the electronic equivalent of slamming a couple of highballs and taking a spin, but people still do it. Every time there is a high profile accident you read in the story, “Authorities are checking the drivers cell phone records…” Everyone knows that you’re not supposed to do it, but they still don’t have laws with any teeth concerning it, like they used to say in school; “Let’s put it on the honor system” – yeah right!

Cell phones can be handy, I used one once when I was working on a giant rooftop ventilation unit on an office roof in New Jersey. I had to get advice from the burner manufacturer in Nebraska. Now that was handy. I do have a cell phone in my car, it’s in the console – turned off. It’s only there in case I have car trouble. I had to use it once when my car wouldn’t start to call AAA. The tow-truck guy got my car going by hitting the starter with a big hammer. That’s how I feel about cell phones, they can be handy tools, if you need them.

Well that’s about it for now, the phone guy came on Friday, and now half the phones are fixed, the office lines are still out. I’ll call the phone company again Monday, and if that does no good, luckily I work at The Old Hardware Store, where we have a good supply of big hammers…