The genesis for this article was actually last weekend, my wife Mary Anne and I were riding our bikes down to the fruit market in Fairport Harbor to get some fresh veggies. The trip down was uneventful, but on the way back my bike (which is actually a trike) threw its drive chain from the rear axle. I put it back on, but it happened several more times, so I just ended up pushing the bike home. I told her that it was because she was always buying big bags of potatoes and loading them into my bike’s cargo basket. Actually I figured out that the reason that the chain was coming off was that the setscrew that holds the chain sprocket stationary on the rear axle was loose. The sprocket would then walk to one side and the chain would jump off. As usual, nothing was actually broken, the parts had just come loose. 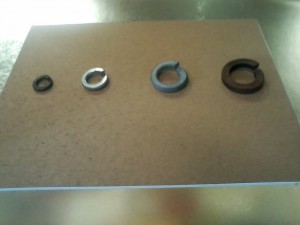 This is a typical scenario with mechanical problems. Bolts and screws don’t usually break, they just come loose. There are several way to assemble things to keep the screws tight. The most common type of device is called a split lock washer. These are spring steel washers that go around the screw below the nut. They are split at one spot, and are bent so they don’t want to lay flat. When the nut is tightened over them, the ends dig into both the nut and the surface that it is being tightened down to. If the nut then tries to back off, the sharp ends dig into the metal to keep it from loosening. 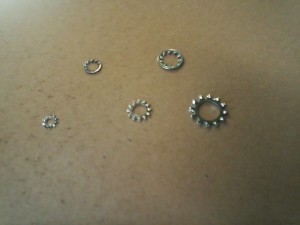 A more elaborate type of locking washer is called a star washer. These operate on the same principle as a split lock washer but have several “teeth” formed on the inside or outside that are bent to lock to the nut and surface just like a split washer. They tend to be used where the surface is softer and the many teeth can dig in. 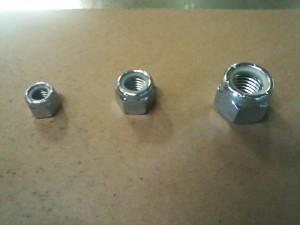 Another way to lock things without adding a locking washer is to use a special locking nut. The most common type of these has a nylon element encased in the top of the nut, it has a hole in it just a little smaller than the screw thread. This nylon insert is then deformed when the nut is tightened (you’ll have to use a wrench) and it grips the screw threads tightly to keep itself from coming loose. 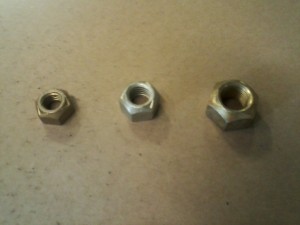 The other common type of locknut has no nylon in it, the screw threads themselves are manufactured slightly out of shape to achieve the same effect. Depending on who made them they are known variously as deformed thread nuts, squash nuts or even prevailing torque locknuts. They have the advantage of working at high temperatures where the plastic in nylon locking nuts could soften or even burn (I used them once to fix the exhaust on my car). 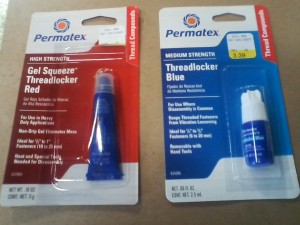 The last way to win the battle to keep things tight is to resort to chemical warfare (no, it’s not against the Geneva convention). Several companies make thread locking compounds that you can put on the the screw threads that will stay liquid until you assemble the parts, and then harden to keep them together. They work kind if like super glue (super glue itself even works pretty well if you don’t have anything else). The real kind come in different grades or strengths from the blue-colored basic lock to the red “never get it off unless you break it” types.

These chemical types also have the advantage that they will work in a threaded hole, not just with a nut and bolt. This is just what I need for my bike sprocket, now where are my metric allen wrenches???