For several years now, I have been meaning to create a window display here at Hill Hardware that combines two of my favorite things, The Great Geauga County Fair, and my Erector sets. I’ve always enjoyed going to the fair, looking at the animals and displays, eating some fair food and generally taking it all in. I have also always loved my Erector sets. In the instruction and sample books that came with my Erector building sets they have several examples of models of amusement park rides that you can construct. I’m not big on the rides at the fair anymore now that I’m older (funny how that works) but I thought that it would be fun to see if I could make some of the rides to display. 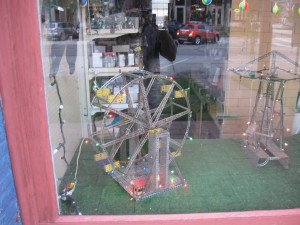 Since they don’t make them anymore, I’d better explain Erector sets to those of you who may not be familiar with them. Back in 1913 a very amazing fellow named A.C. Gilbert invented the Erector set and began marketing it to the toy world. An Erector set is a collection of metal parts like girders, gears, wheels and later electric motors that could be used to build an amazing variety of machines, vehicles and structures. Gilbert made Erector sets in an amazing plethora of sizes and styles. I never got any for Christmas as ol’ A.C. Passed away and the company stopped making them in 1964. 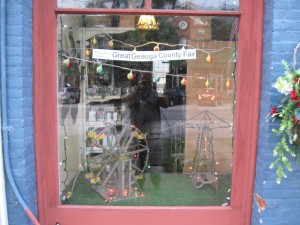 I did get two sets second hand from my older cousins when they went away to college. These I played with endlessly until I got older. I never lost my interest though and added a couple more sets that I came across at flea markets and yard sales. I have used them to make display platforms for the store windows before and they never fail to solicit comments from older gentlemen who remember them from their youth. 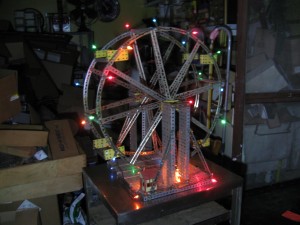 For the fair window I built loose copies of the big ferris wheel and airplane ride models. These were both illustrated in the instruction book. (Perhaps “instruction’ is too strong a word. The books give pictures of finished models, but little in the way of instruction. You just had figure it out for yourself.) I had to take some liberties with the construction to suit the parts that I had available. Both of these models could be motorized with the electric “engine” that came with the kits, but setting this up can be pretty tricky, so instead of adding motors my wife came up with the idea of putting lights on the models for that after-dark midway effect. I set them up on a timer that turns the lights on at dusk and turns them off again in the morning. 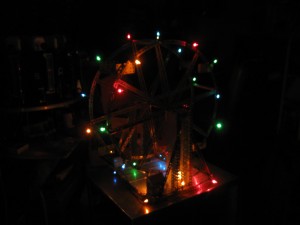 They came out pretty good if I do say so myself, I was going to try to build a merry-go-round too, but I ran out of time and Erector parts. Maybe I can round up a few more parts if I’m lucky, you can’t blame a guy for dreaming, at the Old Hardware Store… 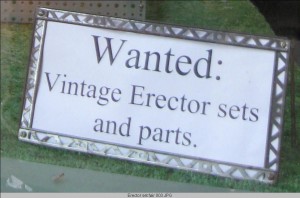