This week is a little different in that I’m writing about an event that I didn’t even attend. I was involved in a tangential kind of way, but more about that later. This is actually one of my wife Mary Anne’s stories, but she doesn’t have a blog so I will have to write it up. It all starts with her “cooking” group. She was looking for something fun to do once in a while, and she heard about a cooking group that meets once a month at the Fairport Harbor Public Library. Some of her friends attended and they pick a different cookbook every month to make something out of. They then bring all the dishes to the Library and everyone gets to taste them all. She really enjoys it. 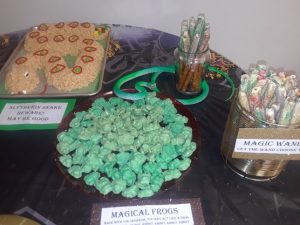 This time was a little different, though. They were putting on a dinner to reward all the kids that completed the library’s Summer reading program. Since it was for kids, they wanted to have a fun theme and ended up selecting the Harry Potter movies. The menu was created to reflect the Hogwarts School of Witchcraft and Wizardry theme, and all the cooks were supposed to dress up like a character from the movie. 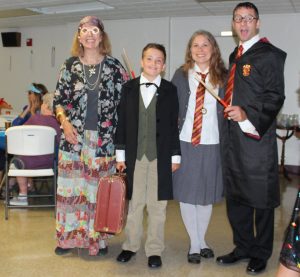 Although we considered different characters, Mary Anne decided on portraying Professor Trelawney, the instructor that taught the art of divination. Together we came up with ideas for the costume and accessories to transform her into the professor. Mary Anne unpacked some of her more bohemian clothing out of storage for the costume and she dug up some clunky jewelry and accessories to go with it. 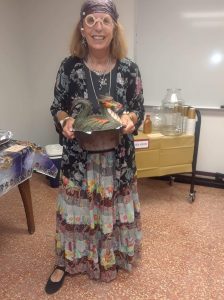 My job was to create some big round glasses to go on over her real ones and to come up with the “grim”. The grim was the bad omen spectral dog that professor Trelawney was always seeing everywhere. The glasses were pretty easy, I just cut them out of a piece of a gold gift box that we had, and they were held on with scotch tape. Creating the grim took a little more thought. In the scene from the movie she sees it in Harry’s teacup in class while the students are learning to read tea leaves. I secured an old teacup and traced the pattern on the bottom with a little white glue. I then sacrificed a teabag and sprinkled a few tea leaves over the glue. I dumped the excess off and the grim was left revealed on the bottom of the cup. 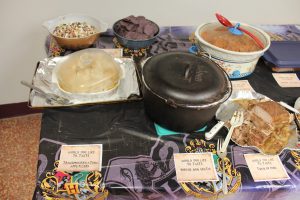 I didn’t get to attend the dinner (apparently I didn’t finish my Summer reading) but from what Mary Anne related, the kids had a great time and the food was good too. So, if you need any “bits and bobs” for your next project, we’ve got plenty of experience, here at the Old Hardware Store… 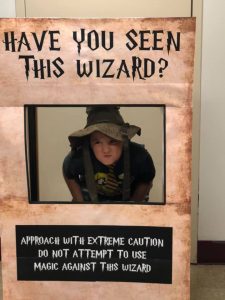