One of the given axioms in advertizing is that everyone loves animals. I get a Hardware Industry magazine at work and many of the hardware entrepreneurs they write about have store mascots (mostly dogs or cats) that are prominently featured in their advertizing. I’ve never written about them before, but we certainly have the animal facet covered. 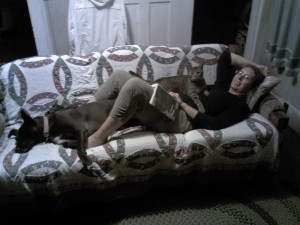 Our dog is Velvet. She was a rescue dog left over from when my wife, Mary Anne, was fostering puppies for the Geauga Dog Warden’s office. She is a mixed breed that was found with her siblings in a box in a park in Youngstown. She was only 2 pounds when we got her but she’s grown into a fine dog. My wife says that she turned out pretty good for a “box mix”. 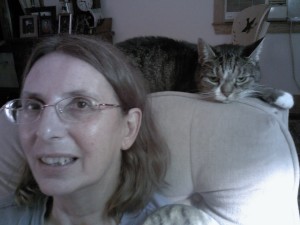 We currently have 3 cats. We have had more or less over the years, but we always seem to end up with about 3. The one we have had the longest is Abby the small tabby. She came home from college with our middle son. You see, they weren’t allowed to have pets in their rental house, but when have you known a college student to follow the rules. So when they inevitably got caught, the cat came home to live with us. 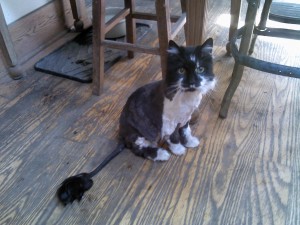 The second oldest is Margie. She appears in the pictures as both a very long-hair and as a funny looking clipped short-hair. She came to us when my wife fell for a hard luck story about how the cat couldn’t stay at it’s current home because of an allergic little boy, blah, blah, blah… Once she said we’d take it, the owner just about slowed the car enough to pitch her out the door, and when my wife called out, “Let me get your carrier back,” they called out, “Just keep it!” She turned out to have a very nasty disposition and my guess is that they just wanted to get rid of her. It has taken us a year to get to be able to pet her and we had to have her clipped because she wouldn’t let us brush her. In fact having her matted fur clipped off seems to have made all the difference for Margie and she has turned over a new leaf behavior-wise and is starting to become much friendlier. 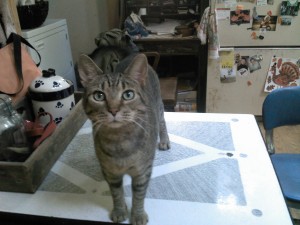 The newest cat is “James the cat”. He was living at our veterinarian’s office when my wife had to take Velvet in for shots. His owner had to go into assisted living and could not take James with him. He made quite an impression on my wife rubbing up against her while she was trying to pay the bill. She told me all about him when she got home, and I knew that he would be coming home to us. He has proved to be quite a cat, very friendly and settling right in with the others.

So, like I said, we have the animal angle about covered. None of them are actually a store mascot yet, but Velvet comes up to the store sometimes. She does have a tendency to bark at the customers, so she usually comes up in the evening when we are closed to keep my wife company when she is working in the office. Maybe someday one will be featured in one of our ads, but for now they just work behind the scenes…at the Old Hardware Store.