In Burton, Ohio there are really only two seasons. “Maple Season” at the cusp of late Winter and early Spring, and “Fair Time” marking the end of Summer. Sure there are also early Summer, usually denoted by “Haying Time” and Winter which around here at least, speaks for itself. This is because, if any of you don’t know, Burton is home to the “Great Geauga County Fair”. The fairgrounds is just north of the village and it is the oldest and one of the best fairs in the state of Ohio. It has everything most fairs have, and more. 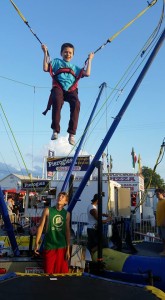 Many farm families in the county participate in 4H and there are many, many project animals on display. Everything from small animals such as bunnies to full size cows and horses. It is just great to see these proud kids with their animals at the fair. It is a contest with prizes for sure, but everyone that participates learns from their project and wants to do better next year.

There are also many craft and produce contests as well, from the flower hall, my wife’s favorite, to the best potatoes. I always like to check out the sunflowers. Last year I grew what probably could have been the winning entry, but I could not figure out how to get an almost 15 foot sunflower out of my backyard and up to the fair!

There are also many carnival-type attractions, rides, games of skill and, of course, fair food! This year I tried a new one, a pretzel-dog. Yup, a hotdog wrapped in pretzel instead of a bun. Pretty good, but hard to keep the condiments on. I finally ended up dipping it. We also always go to the 4H milkshake booth. They are the best at the fair, and the proceeds go to a good cause. 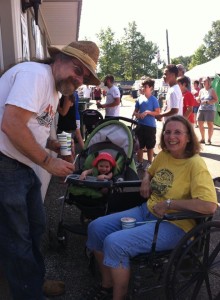 Finally there is the Burton Chamber of Commerce booth, where we have to go tonight to man it until the fair closes. It’s in one of the merchant halls and we’re there to sell maple syrup and candy (see “Maple Season” above) and to put the word out about what a great place Burton is to live and work. So stop by and say “Hey” and pick up enough local syrup to last you through the coming long winter to Burton’s next “Maple Season”.