We Have A Winner Even More New Products

From Ellicottville To Cattaraugus

Those of you who know me know that I’m a real lover of crowded places. So it should come as no surprise that when Mary Anne and I took a few days off last week, we headed for the “Big City”. Actually we were invited up to our son and daughter-in-law’s cabin in New York state for a few days. It’s located new Ellicottville in a unincorporated area know as “Big Valley”. We drove up Wednesday afternoon and got there about dinner time. 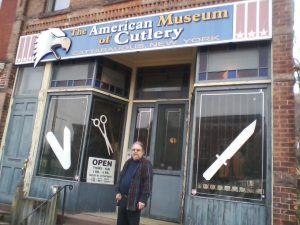 Chad and Kate weren’t coming up until later, so we were on our own for dinner. I checked out the local guide and we ended up driving over the hills to Cattaraugus. This thriving metropolis was home not only to the establishment that I had picked for dinner, but to the American Museum Of Cutlery. Unfortunately the museum was closed and we had to content ourselves with a few peeks through the front windows. It looks like quite a place and according to their literature it is home to an “Internationally important” collection of historic pieces. Well, maybe next time that we’re in town. 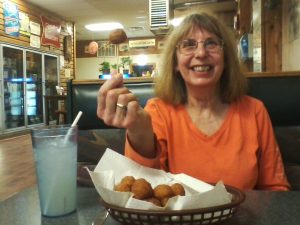 At least the restaurant that I had picked was still open. Jenny Lee’s Country Store was quite a place. Not only can you pick up your pop and chips in the front, they have a dining area in the back where you can get your favorite dinner treats made up expressly for you. The food was actually pretty good, I had the “Jenny Lee Special”, which turned out to be a double burger with the works in it. We also split a basket of deep fried breaded mushrooms that we both enjoyed. 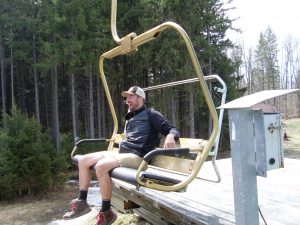 The next day after Chad and Kate had shown up we made a great breakfast and headed out for a hike. Unfortunately Mary Anne had to do payroll for her work and had to stay home to finish it. The rest of us ended up hiking to a spot called Spruce Lake. It is actually a reservoir located above one of the ski resorts near Ellicottville. Of course, the ski places are all closed for the season by now, but during the Winter, the lake provides the water that they use to make snow with to supplement the natural stuff that falls. We took a break on the shut down ski lift and enjoyed the sunshine. 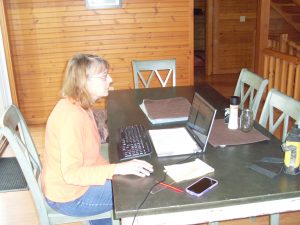 When we got back to the cabin, Mary Anne had finished her work, so we headed down to Ellicottville to do a little gift shopping and have dinner at one of the local restaurants. I had a delicious baked macaroni and cheese there and everyone else enjoyed their entrees too. Unfortunately Chad and Kate have decided to sell their cabin this Spring, so this will be our last trip up there. It was a lot of fun though, and I’ll remember it fondly back here at the Old Hardware Store… 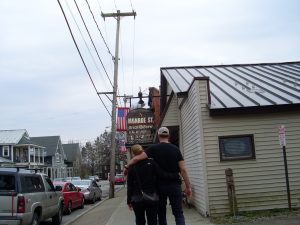