Well, as I talked about last year, I’ve started to get back into going fishing a little bit, which I haven’t done a lot since I was little. I only got out once last year, but this year we have gone out a few times. It took a while to get the logistics straightened out, but now my friend Lou has his boat up at out cottage in Fairport Harbor, and we’ve fixed all the things that we needed to do to take it out. Now it’s just a matter of getting the same day off and driving up there, and putting the boat in the water. 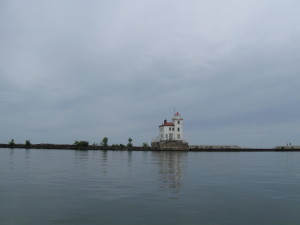 From there, logic would dictate that I’ve been catching lots of fish, but unfortunately that has not been the case. The first time that we went out, the perch were hardly biting and although we caught a couple dozen total, it took a lot of finesse to get them to bite and Lou, who is a real fisherman got almost all of them. The next time we could not find the perch and mostly caught sheephead and gobies, both of which are fish that you throw back. This last time the weather didn’t cooperate. We checked the forecast before we went out. It said sunny and waves under 2 feet, but when we got outside the breakwall we were in choppy 3-4 foot waves, with the occasional 6 footer thrown in. It wasn’t rough enough to be dangerous, but we tried fishing for an hour and it was tough, with not bites at all. We decided to pack it in. 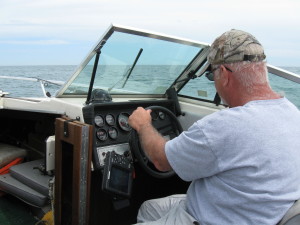 I was just joking with Lou that the new name for his boat should be “Skunked” as we did not catch a thing, but when we were docking the boat my hat blew off and into the water. To my surprise it sank like a stone and by the time we had the boat on the trailer, it was nowhere in sight. I thought that we could try to reach it with the boat hook, but Lou got my fishing pole and hooked my hat on the first try. So in the end he really did catch something and we didn’t really get skunked. I sound like an Indian’s fan, “Maybe next time.”