I don’t know if we can blame it on global warming or not ( I always do!), but the seasons have been a little off lately. Last Fall, we went from running the A/C at the store on Wednesday to having to turn on the furnace Friday morning. It changed that fast! Then after a month or so of wintry weather, it got mild again until after New Year’s. I’ve actually been driving my car to work instead of my Jeep, because I didn’t need the four wheel drive. The last few days though, the weather has turned again and it looks like Winter is really here. 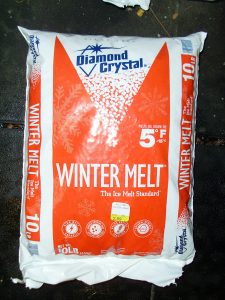 At the beginning of the week, we got several bouts of freezing rain, making everything very slick. Then we got a couple inches of snow, but it’s been warm, so that partially melted and then refroze, making it all worse. Needless to say, we’ve been selling a lot of salt this week. What exactly is ice melting salt? The basic kind is just what it says, natural rock salt. It’s a local product, it’s mined from several places under Lake Erie. One of the mines is right across the Grand River from our cottage at Fairport. It’s hoisting tower is one of my boating landmarks when we’re out on the lake. Although it’s freshwater now, a few hundred million years ago Ohio was mostly covered with an inland salt sea. Over the eons, a layer of salt many feet thick was laid down and then covered up with more sediments. Very convenient these days. Dig down a few hundred feet and there it be, all the rock salt you could ask for. 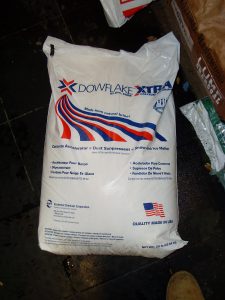 The other ice melting products we sell are processed salts of other kinds, they work better, but are more expensive that rock salt. Rock salt looses its effectiveness around five degrees, and you Ohioans know it can get a lot colder than that around here. Calcium Chloride melts down much lower, and comes in either flakes or granules. It melts faster too, but is more expensive. Magnesium chloride melts the lowest of all, but is the most expensive. They also make mixes, which are usually rock salt coated with other salts. They are good as you get some of the effectiveness of the better salts at a lower cost. 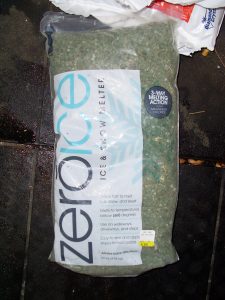 All of these salt-based melters are hard on other things besides the ice. They can spall concrete, kill plants and cause irritation of animal paws if they are used to excess. An alternative is a product called “pet” salt, which is sold under different trade names. It is a urea-based melter which has no salt in it. It is milder on concrete and vegetation and will not bother pets if they come into contact with it. 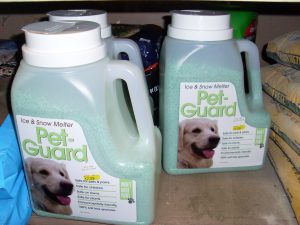 Well, those are some of your choices when it comes to ice melting products. Where does “feeding the chickens” come in? That is what the merchants here on Main Street call it when they have to go out and spread salt on the sidewalk out front, “Here chick, chick, chick…”. I guess that it takes all kinds, here at The Old Hardware Store… 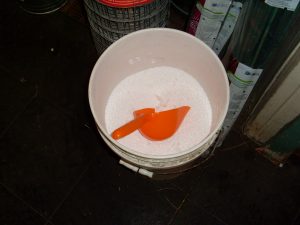