Let There be Light (and Heat!) Springtime in Ohio

This week I thought that we would cover a topic that I don’t think that we’ve talked about yet – Fuses. Several customers came in this week needing fuses so it seems to be a timely topic, especially since the power was out for awhile because of the big winds Thursday. Fuses are a safety link used in electrical circuits to cut off the power in case there is a problem with the circuit. There are essentially two common problems with electrical circuits that will cause a fuse to blow. One is a short, this is where there is a direct connection between the two wires in an electrical circuit allowing very high dangerous current to flow. The other is an overload, this is usually when too many electrical loads (appliances) are plugged into one circuit. This causes a lower load than a short, but it is sustained for a longer time and it will eventually cause the supply wiring to heat up possibly causing a fire.

Fuses come in many shapes and sizes, but they all have one thing in common. That is that they are rated to carry a certain amount of electrical current. That is measured in amps, so each fuse will be marked with it’s amp rating, say 10 amps. This means that it will carry that many amps of current safely, but any more than that and it will “blow” and interrupt the circuit. All fuses are made with a precision wire link that is sized to melt when too much current passes through it. This is what happens when a fuse “blows” and the small pop, which is like a miniature explosion, is where the “blowing” nomenclature comes from. 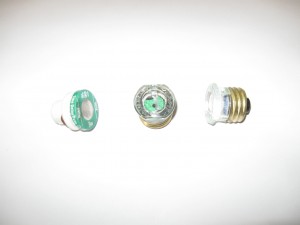 Some of the common types of fuses are as follows. One of the oldest types is the glass or glass-topped screw in “Edison” fuse (yup, named after good ol’ Tom). These have a lightbulb style threaded base and are often found in older homes. When they are blown they usually have a dark mark on the inside of the glass top showing that they are bad. To change them, just unscrew the old one and screw in the new. Just be sure that it has the same Amp rating as the old one. Substituting a higher Amp rating either by mistake or on purpose can be dangerous and this possible confusion led to the next type. These are “SL” type screw in fuses. They are similar to the ordinary kind, but have different threads on the bottom for each Amp Rating, thus they cannot be screwed in if they are the wrong type. 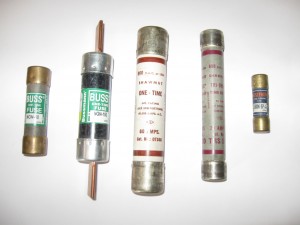 Cartridge type fuses are cylindrical and come in different sizes. They have different lengths and diameters related to their amp rating and voltage range. Some of them can get pretty large. One time at the mill, some roofers shorted out a 17,000 volt main feed and we blew a fuse about three feet long! Normal household cartridge fuses are much smaller though. The littlest size are commonly found on well pump, water heater and air conditioner type applications. The large ones are used on stoves and electric heat. To change one, make sure the power if off, and use a fuse puller to pry out the old fuse. Pop the new one in the same way. 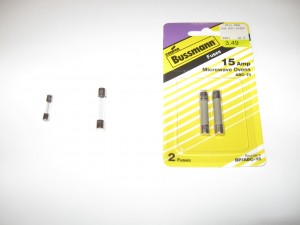 The last common type of fuse in known as the instrument fuse. They are used in automobiles and appliances. There are two types. Miniature cylinders, made of either glass or ceramic, and colored plastic blade fuses. The small glass ones are found in appliances and used to be used in cars (boy, I’m dating myself now). They are replaced with a puller, just like their big brothers. Blade fuses have two metal blade contacts that insert into the holder to both mount the fuse and make the connection. There are the large (about 1-1/2” wide) under hood type and then the smaller fuse-box kind. The fuse-box type come in both the original size (about 3/4”) and a smaller compact size. Someone even told me that they now make a sub-miniature size, but I haven’t seen one yet (maybe you need a magnifying glass?). These are easy enough to change, but once again be sure to use the right amp size. 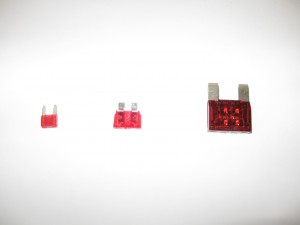 One last thing with fuses, please no cheating by using tinfoil, pennies or other metal objects to make the connection when a fuse has blown. These, while they might get the current flowing again, offer no protection to the circuit and may cause a fire or other calamity. It’s just a bad idea to go without protection, because we already know that something may be wrong with the circuit (the first fuse wouldn’t have blown otherwise) so turning the power back on without fuse protection is just a bad idea. Just get some extra fuses to do the job right, we have them, at the Old Hardware Store…