Well, two weeks ago I was writing about Spring being in the air, and now that it is two weeks closer to Spring and we’ve got another cold snap and more snow. I almost could not get to Burton on Friday, my usual route was closed by several cars off the road so I had to turn around and come up the back roads. Man, there was really some snow back there. Good thing that I had the Jeep. I had the 4-wheel drive locked up and I did OK. I just had a little trouble seeing where the road was at times, good thing they’re straight! 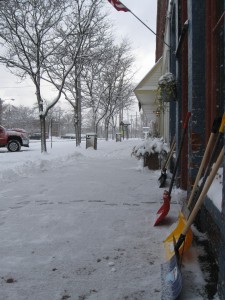 Then I got as far as the big hill leading up into Burton, and the cars were all just stopped. Several cars were stuck on the hill, and no one was getting anywhere. We all just sat there until the Burton street department plow came down and salted the hill. He then had to do a 3-point turn on the road (no easy feat with a plow on the front and a salt spreader on the back). Then he salted his way back up the hill and I followed him up, just going around the other cars that were spinning their wheels on the hill. I finally got where I was going right at eight o’clock. Forty minutes for a trip that is usually about 10 minutes. At least I made it. 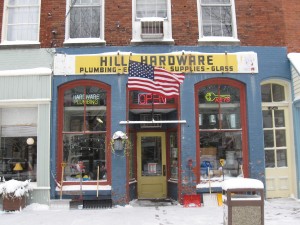 I was attending a local business meeting and when asked to introduce ourselves, I said, “I’m Dave Lamppert and my wife Mary Anne and I run Hill Hardware in Burton. All the big box stores have their swimsuits and patio furniture out, but we’ve got plenty of rock salt and snow shovels on sale, because we know Geauga county.”