Let There be Light (and Heat!)

If you were watching the news this week, you may have noticed that the world did not end with the cataclysmic snowstorm that was forecasted. We got a little snow (about 6” in Burton) but nothing to get excited over. The actual problem weather was the week before, when we were subjected to 60+ mile per hour winds that knocked down many trees, blocking roads and downing power lines. The power in Burton went off at 4:00 PM and didn’t come back on until the next morning. Here at The Old Hardware Store we stay open when the power goes off (no computerized checkout) and as long as you have cash or check, we can still get you what you need. I just fire up a couple flashlights or lanterns and keep track of sales using pen and paper.

I managed to get home even though there were several road closures from fallen trees. Our power was on in Troy, but I heard later that some of our customers though were out of electricity for up to two days. Several came in during that time to commiserate and to purchase lamps, oil and wicks. They had opened up the firehouse and veteran’s hall for folks that didn’t have any power, but this being Geauga county most of them decided to decided to tough it out at home. If you want to be like them, then these are some of the items that you might need. 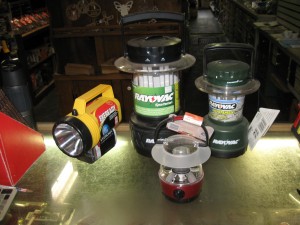 The first thing that is handy is a flashlight. It can just be a small one, but you have to know where it is and it has to have good batteries in it. I usually have one in my coat pocket, and if I think the power might go out, I get it out and carry it with me. It doesn’t have to be big and bright, it’s just to light your way to get your better lights going. A battery powered lantern is a lot handier for emergency lighting than a flashlight, and will last longer. Some have a regular bulb, but the better ones have either fluorescent tubes or LEDs in them. They all work, but the better and bigger ones put out more light and last longer. 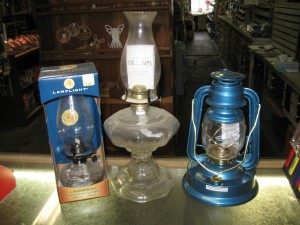 An electric lantern will get you some light, but what about heat? That is where an oil lamp comes in handy. They not only put out more (and cheaper) light, they put out quite a bit of heat too. If you light several lamps in one room, they will keep it at a comfortable temperature as long as it’s not too cold out. Just be sure to follow standard safety precautions like you would with any combustion powered appliance indoors. In addition to your lamp, you will need extra lamp oil and wicks. Many people call these kerosene lamps, and they will burn kerosene, but it can smell a little, and more highly refined lamp oil provides the same light without the telltale kerosene odor. Extra wicks aren’t needed very often, but when you need them, you need them. Just be sure to know the right size. We have all the sizes here at the store, even the odd ones. 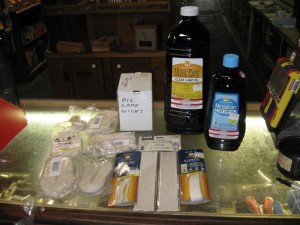 So there you go, if you’re set up right, having the power go out can be an adventure instead of a disaster. Just make sure that you have supplies before hand, they’re all available, at the Old Hardware Store…