Deal Island Vacation, Chapter 2 – Being There

It’s now time to continue with our story about Mary Anne’s and my vacation to Maryland. Once we finally made it unscathed to our cottage on Deal Island, things settled down more into our basic vacation mode. We slept in the next morning (as late as the dogs would allow, about 6am) and then made ourselves a hearty breakfast. We took the dogs to the beach for some exercise and then figured out what we wanted to do for the day. 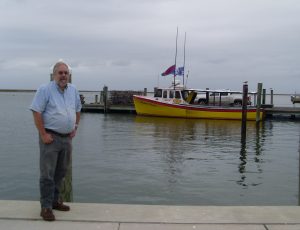 We decided to take a day trip to the nearest bigger town on the coast which was Chrisfield, about an hour drive away. It was actually only right across the bay, but with the undulating coastline of the Chesapeake Bay, you spend a lot of time driving back and forth to the main road on the peninsula to get just a little further down the coast. Chrisfield is known as the the Crab Capitol of the bay, and it has many boats based in it’s large harbor. 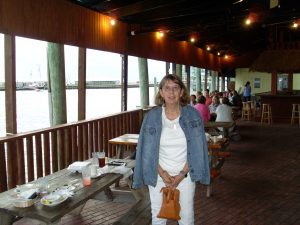 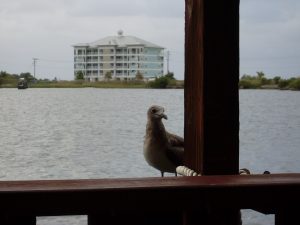 We took in the sights and then decided to go out for a nice dinner at one of the many seafood restaurants located in town. Captain Tyler’s Crab House sits right on the harbor, and we elected to eat outside, on their covered deck. It wasn’t fancy, but the seafood was the best I have ever eaten. The seagulls sat perched on the railing watching us, but were polite enough not to take food right off our table. 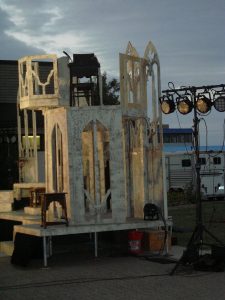 After dinner we walked down the street to the Historical Museum, it was closed for the day, but after-hours they were playing host to a Brown Box Theater’s free production of William Shakespeare’ play, “Measure for Measure.” It was the Bard under the stars. We greatly enjoyed this very professional production of a Shakespeare play that I was not familiar with. The scenery was very well done and the performers were all very good. It was fairly easy to follow, but as with all Shakespeare; I find it easier if I have read a plot synopses (conveniently printed in the program) before hand.

The next day we repeated the morning opening activities before driving across the peninsula to visit the adjoining islands of Chincoteague and Assateague. Like many twins they are close, but very different in character. Chincoteague is a developed, commercial island, with homes restaurants and hotels, but just across the causeway, Assateague is an undeveloped parkland. If you are unfamiliar with them, both islands are known for their wild ponies. They actually live in the national park on Assateague, but once a year they are rounded up by the firemen from Chincoteague and swum across the inlet to the other island. Enough young horses are culled out of the herd to keep a stable population of about 150 horses and are auctioned off to raise money to support the fire department. (our Burton firemen just have to sell pancakes in March). We had a nice hike and ate our lunch on the large Atlantic-side beach. We got to see the horses (also eating lunch) out in the marsh on our way back to Deal Island. We ended up having dinner at Arby’s on the island and it was pretty good. We ate outside while the sun was going down, right across from the boat harbor. 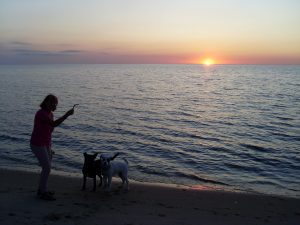 The last day we drove up to the northeast shore to do a little shopping in Rehobeth and then ate a nice lunch in Bethany Beach. We spent the evening at the small public beach on the island, throwing sticks for the dogs and watching the sunset. That night we packed up and got ready to leave the next morning. It was a nice relaxing trip, and the dogs were pretty good (considering). The drive home was uneventful and it was time to go back to work at our own small-town establishment, the Old hardware Store… 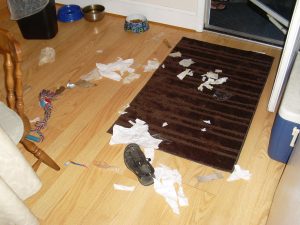