Deal Island Vacation, Chapter 1 – Getting There

I haven’t written anything in awhile, we’ve been pretty busy and took some time off to go out of town. Mary Anne, my wife, occasionally gets sudden urges to go on a trip and in August she started emailing me vacation property listings. They were all for cottages on islands on the East coast. I was just picturing an 8 or 9 hour drive to get somewhere, and then having to wait to take a ferry across to an island. I try to be practical, but I know that I can’t fight her urges, so I emailed back that we could go to an island, but to please find one that we can drive to. She did it!

We ended up going to visit Deal Island, which is just off the Chesapeake Bay side shore of eastern Maryland. We have gone to the Maryland shore on vacation before, but always to the more developed Atlantic coast. The western bay coast is much less developed and is home to the bay fishermen, or watermen as they are traditionally known. They trap crabs, dredge for oysters, dig clams and, of course, fish. The Chesapeake Bay provides a cornucopia of seafood, and folks have made their livings gathering it for generations. 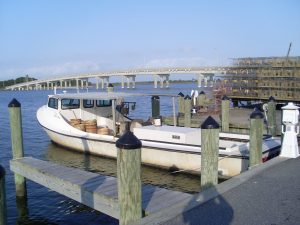 Getting there wasn’t too bad, we got a late start (of course) and as we took our two dogs we had to stop a little more often to give them a little exercise. When we tried to get a late sandwich for dinner, though, things took a quick turn into the Twilight Zone. When we tried to get back to the main road, we just couldn’t. They had closed the only road going back to move a house in the middle of the night; the man directing traffic said that they were going to put it on a barge, whatever! After following many back roads and turning around in a few cornfields we finally made it back to the highway. 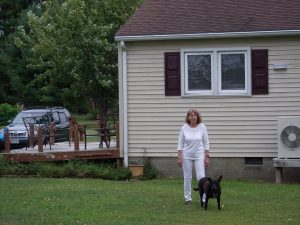 When we finally got to our correct turnoff, we had to follow another 2-laner for several miles through the pine forests and finally across the salt marshes. There actually was a bridge leading over to Deal Island but we weren’t through yet. We were in the town of “Deal Island”, but our cottage was actually in Wenona, on the far end of the island. It’s only a couple miles, but it is a narrow road that includes no less than four 15-MPH curves. We finally got to the cottage about midnight, and boy were we glad to be there, our troubles were over! Unfortunately, the landlord had given us the wrong number for the key box and we couldn’t get in. Luckily they did answer our SOS call in the middle of the night and were able to text us the correct code. 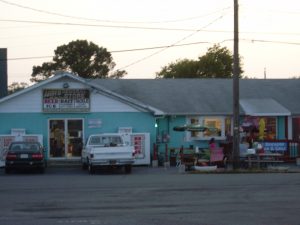 We warmed up our now cold sandwiches and hit the sack. When we checked it out in the morning everything was great. The cottage was very nice and you could see the water from the deck on the side. It was about two blocks from the harbor, home to Arby’s General Store the only place on the island to buy anything. It is a combination store/bar/restaurant and they sell it all from a fish dinner to 5 gallons of hydraulic oil for your fishing boat. I talked with the proprietor for a bit, he was quite a character. In a way, it was pretty similar to The Old Hardware Store…

Good day for a Ferry ride! Always something going on in Oxford.