Deal Island Vacation, Chapter 3 – The Quick And The Dead

I’m about finished with stories about our vacation on Deal Island, but I figured that there were a few more things that I could cover before we go on. While Deal Island is very small, there are a couple (at least) unique things about it. They are crabbing, skipjacks and the cemeteries. 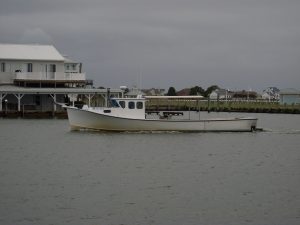 As I mentioned before, Chesapeake Bay is home to the watermen, those folks who make their living harvesting seafood out of the bay. The most obvious industry is crabbing. Piers by the harbor are piled high with crab pots (or traps) which are big metal mesh boxes about three foot square. The way they work is pretty ingenious. There is a small bait box on the bottom accessed from the outside and covered by a trapdoor. On each side, there is a built-in funnel shaped inlet forming a passage into the box. The trap is baited by filling the bait compartment with any convenient catch leftovers (crabs aren’t picky) and dropping it over the side of the boat on a line with a float on the end. The crabs are attracted to the bait and crawl into the funnel inlets to get at it. They cannot get back out and are stuck. Coming back later to check the trap, the watermen pull it up and empty the crabs into a basket for transportation to the seafood warehouse. The trap is re-baited and dropped back in the water for next time, pretty simple, as they say, but not easy. 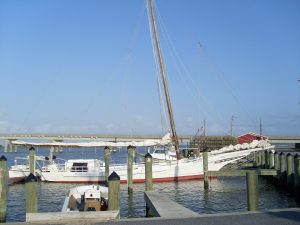 The other seafood industry that is big on Deal island is oystering. While motor work-boats are common these days, this was traditionally done with a sailing boat known as a skipjack. Skipjacks are single masted, shallow draft boats that are set up with a small cabin in the front, and a large open deck amidships to provide workspace. The main equipment consists of a large winch and a dredge. The dredge is a large metal mesh, purse-shaped bag. In practice the boat proceeds to the oyster bar and drags the dredge across the bottom. The winch then hoists it up on deck, where it is dumped out for sorting. Good oysters are checked for legal size and put aside. Small oysters, empty shells and other unwanted catch are put back into the bay. While this is going on, the dredge is out again, and the process is repeated. This would be hard enough to do all day ashore, now imagine trying to do it on a pitching deck in the wind and the spray. It isn’t by accident that watermen have the reputation as being pretty tough. 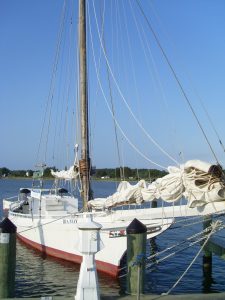 An interesting aside to this story is that, while traditionally a sailing vessel, most skipjack oystering is now done using a motor. This is a pretty neat trick as skipjacks don’t have one! It seems that several decades ago, some enterprising skipjack captain came up with the idea of using a small motorboat to push the skipjacks into and out of harbor. This is the trickiest part of any sailing operation, and using a push-boat saved time, and as they say, “Time is money”. Well, it wasn’t long before somebody got the idea of using the push-boat to power the skipjack all the way out to the oyster grounds and why not use it for the oystering too! The skipjacks have a special, more liberal, oystering license issued to them as the state wants these historic boats to be preserved. It allows harvesting under power only two days per week and under sail the other three. Interestingly, with the difficulties involved in equipping and manning a boat to oyster under sail, most boats never go out under sail. The only times they actually sail is for the annual skipjack sailing race featured in the local skipjack festival. 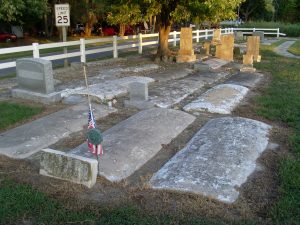 The other interesting thing on Deal Island are the cemeteries. Deal Island is, on average, only about three feet above sea level. That means that if you dig a hole more than three feet deep, you’ve just dug a well. This means that like New Orleans, standard graves just won’t work. In old New Orleans, which is actually below sea level, this lead to above ground graves that were built on foundations raised above ground level. Deal Island isn’t quite that bad, as it is slightly higher, but regular burials just won’t work. Folks end up getting buried in concrete vaults set level with the ground, to stay above the water table. Large slabs cover the graves at ground level, and regular tombstones are set at the end to commemorate those that have passed on. This gives the local cemeteries a very different look, compared to the more usual burials found here in Ohio. It’s very practical, though. The fellow who runs Arby’s General Store mentioned that during the last hurricane, there was 7-1/2 inches of water in his store. That would mean that most of the island was awash, so the raised cemetery graves, while unusual, are very practical. 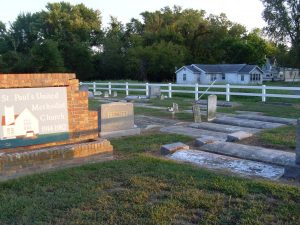 I think that’s about it for our last trip. It’s time for me to get back to work, I know that I don’t have what it takes to be a waterman, so I’d better stick to the Old Hardware Store… 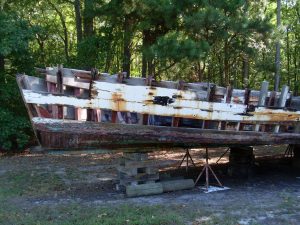