The Salt of the Earth Stuck on You – Part Two 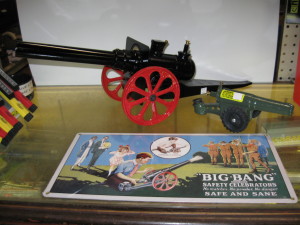 This week’s article isn’t precisely about hardware, but it definitely fits into the old hardware store. When I was young, I used to read comic books and there were always ads in the back for various merchandise that you could send away for (remember X-Ray Specs?). The one that I always wanted was the “Big Bang “ cannon.
I could never talk my Dad into it and I seemed destined to live my life without one. Fast forward to middle age. My wife was trying to find me a Christmas gift and by chance I had just seen an ad for Big Bang cannons in a magazine, they still made them! To cut to the chase, I am now the proud owner of a Big Bang cannon and it is every bit as fun as I knew it would be as a kid. I learned that Big Bang cannons are actually carbide cannons powered by a pinch of carbide powder and strangely enough, a little water. The unusual chemical properties of carbide produce a spontaneous reaction that produces a whiff of acetylene gas, which when mixed with the air and prodded by a small spark, explodes with a tremendous bang which lent the cannons their moniker.
Big Bang cannons are still produced in the good ol’ U.S.A. And are available in many sizes. They are made of cast iron and steel and the larger models feature automatic chargers to add the carbide powder. Carbide powder itself is an inexpensive, nonflammable powder that is inert until water is added. Big Bang cannons do not shoot any projectiles and are considered noise-makers, not firearms, just like very loud cap guns.
We unlimber ours for New Year’s Eve, the Fourth of July and any other time we feel the need. Of course, after I got mine I had to contact the factory and we are now a proud distributor of Big Bang cannons at the old hardware store.