Caution – Adults at Play Stuck on You

Stuck on You – Part Two 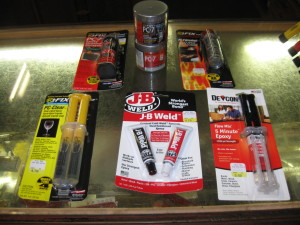 Last time we talked about various types of glue. As we said, glues work well only when the gap between the two parts to be joined is small. When there is any appreciable gap that you need to fill, you need a cement. Think about how mortar fills the joint between two bricks, you get the idea. The most useful type of cement for most general repairs is epoxy.

Epoxies by definition are two part chemicals that harden when they are mixed together. This allows you to mix the two parts of the epoxy, spread it on the parts to be fixed and let it set up. The resulting material creates a solid mass that will both stick together the two parts and fill any gap between them. This being said, different epoxies, depending on their formulation, offer many different characteristics that work better for one repair or another.

One of the first differences available in the mix is fillers, or lack thereof. Unfilled epoxies can be made clear and these can be used to patch clear items with a joint that hardly shows. Other epoxies contain fillers materials that both extend the basic mix and lend greater strength to the resulting mixture.

Another important characteristic in epoxies is cure time. This is how fast the mixture sets up. This is usually noted on the package as two numbers, the first is working time, which is the amount of time you have to work with the mixture before it sets up. The second is cure time, or the length of time needed for the joint to reach its full strength. Set up time can vary from 5 minutes for the quick setting types to about a half hour for regular ones. Cure times for these vary from about an hour to a full day. Cure time also varies with temperature, so be sure to read the package for the particulars.

The body, or thickness of the epoxy mix is another variable. Liquid types often come in a syringe, and are like a thick syrup and can be poured into a joint, convenient, but they must also be confined or they can pour right back out. Thicker mixes come in tubes, like toothpaste and are similar in thickness. The firmest type are putties and can be molded by hand into various shapes (think Play-Dough here).

The characteristics of the final result should be considered when picking an epoxy to use. The expected strength of the mix will be given on the package. The heat that the repair will be exposed to should be taken into account. Epoxies are often used for automotive service and under-hood temperature should be considered. Normal epoxies are usually good for only about 200 degrees, but high temperature mixes can be good for 500.

As they come in two parts mixing epoxies is part of the game. Liquid epoxies usually come in a dual syringe affair that provides the right amount of the two ingredients as you press the plunger. Some include a mixing tip that swirls the two parts together as they are dispensed, very convenient. Other types just supply the correct amount and you must mix them with a paddle in some convenient spot (the plastic package usually works well). Paste types can be worked on a piece of cardboard with a Popsicle stick or similar tool. Just remember to use disposable items because the epoxy, once set, is permanent. Putty types can be kneaded by hand, disposable gloves are recommended.

Well that about covers epoxies, the miracle glue. Next time we’ll cover something new, at the old hardware store.