Cut to the Chase Caution – Adults at Play

The Salt of the Earth 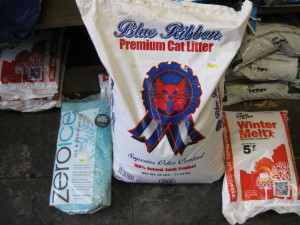 I was going to write about hardware this week again, but Mother Nature intervened this morning. I don’t know about the rest of the country, but here in the Midwest we have been suffering under an early onslaught of wintery weather for the last two weeks. In November our weather is usually cool with highs in the mid 40’s but lately we have had very cold weather and lots of lake effect snow (though not as much as Buffalo!). Well this morning the thaw began with some freezing rain which left the roads and walks covered with glare ice. My helper that was supposed to open the store had to salt the roads and walks of his apartment complex, so I had to come in and open. I then had to salt the front walk three times to make it passable for customers. So today’s topic presented itself, “how does that whole salt on the ice” thing work, anyway.

The trick to salt melting ice is that a salt and water mixture has a lower melting point than pure water alone. Pure water freezes at 32 degrees Fahrenheit (0 Celsius) but a salt and water mixture can lower that down to 0 degrees (yes, that’s how they came up with zero when they set up the Fahrenheit temperature scale). By salt I mean calcium chloride which is common table salt. Other types of salt (chlorides) have different melting temperatures, which is why different ice melting chemicals use different or a mixture of salts.

Calcium chloride, also known as rock salt, is mined right here in Ohio from under Lake Erie, as well as many other locations. It is the cheapest of the ice melters available. The only problem is that it stops melting effectively when the temperature drops close to zero. Potassium chloride melts to a lower temperature than regular salt and magnesium chloride melts to the lowest temperature of all. These other chemicals are more expensive than regular salt as they must be manufactured rather than mined. Several melting chemicals are mixes where common salt granules are coated with potassium or magnesium chloride (or both) to get a better melting effect at a lower cost. Read the ingredients listed on the salt bag to get an idea of what you’re getting.

There are a few other problems with regular salt as well. One is that it has a corrosive effect on concrete, which is often what it is being spread on. The other types of salt are less aggressive and are recommended for concrete service. Another is that excessive exposure to salt can be irritating to your pet’s paws and can lead to an upset stomach if they lick too much of it off when they come in. Newer “pet-safe” melters are available which are less irritating than regular salts. These are urea based (organic) chemicals that still melt ice but do not contain the salts that cause the problem.

One last item that while not exactly an ice melter, can be a handy item in the Winter. That is cat litter. Cat litter is gritty enough to add traction when spread on ice and can keep people and cars moving on slippery surfaces. Many people keep a bag or two in their car for extra weight in the snowy months and the bags can be broken open to provide emergency traction if you get stuck in an icy driveway. Well that’s about it for today from the old hardware store, hopefully we are in for some better weather and next time we can cover some real hardware.