Lest We Forget The Holiday Season

Have you ever had one of those moments when it seems that you must be experiencing someone else’s life? I’ve had a few of these from time to time over the last few years, and I think I’ve figured out what they are. In our minds we all have a general plan of things that are supposed to happen, and when you find yourself doing something that you hadn’t ever imagined, you get one of those feelings. It’s sort of a reverse deja vous. Not one of those “I think I’ve done this before”, but a “I didn’t think I’d ever do this”. 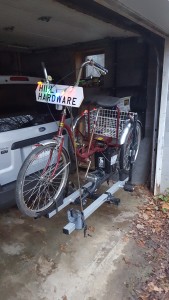 Well last night, as I found myself in the dark, in the rain, sitting on an adult tricycle with Christmas lights strung on it, getting ready to join a night-time lighted parade to celebrate the beginning of the Holiday season in Burton with the turning on of the Christmas decorations, I had one of those moments. 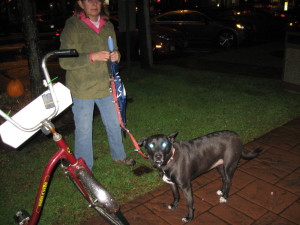 It was actually pretty fun, going down the street, in the lighted parade, my wife was with me walking our dog, Velvet, who I had rigged up a lighted leash for. Velvet is mostly all black, so the effect at night is pretty good. Sort of a “the invisible man takes his invisible dog for a walk” kind of thing. We were following a bunch of kids on unicycles, and the crown watching, though small, was enthusiastic. Several people that we knew shouted “Yeah, Hill Hardware!” as we went by. When we got to the town square, The marching band played, the church choir led some Christmas carols, and they threw the magic switch. The lights were great and of course there was an appearance by the big man himself who arrived in style atop one of Burton’s fire trucks.

Like I said, it was one of those “I didn’t think that I’d ever find myself doing this “ moments, but that’s the kind of event I’ve sometimes found myself in, ever since I started to run The Old Hardware Store.