If today’s date, December 7th, does not sound familiar to you, it should. It is Pearl Harbor Day, 74 years ago today, Japanese planes and submarines attacked the American base at Pearl Harbor in Hawaii. It was a surprise attack from another country that we were supposed to be at peace with, and American losses, in ships, aircraft and servicemen were very heavy. It directly led to America’s involvement in World War 2. 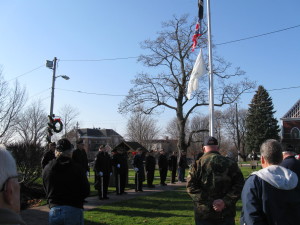 There was a memorial service and salute in memory of Pearl Harbor today on Burton square. There was a prayer, a memorial reading, “taps” and a rifle salute put on by the local veterans. Several Burton residents also were there to observe the ceremony. There were even a couple World War 2 era military vehicles in attendance.

I’m glad that the veterans held this ceremony to remember Pearl Harbor, because it reminds us that freedom isn’t free, and there are always forces out there, that can attack at any time, and try to take away America’s hard won freedom. A good lesson to remember, especially with today’s tense international situation