What’s Your Point? (Three Point, That Is) Timberdoodle Flats

One last story about Mary Anne’s and my trip to Allegheny National Forest in Pennsylvania recently. If any of you have spent any time in Allegheny or looked at some of my pictures of that wonderful wilderness, you might be in for a shock. While it may look like unspoiled wilderness, that no human had ever exploited, it probably could be classified as America’s first industrial brownfield site. Helped along as a National Forest (not a park) it has recovered nicely, even as it continues, to be as it says on the entrance sign a “Land Of Many Uses”. 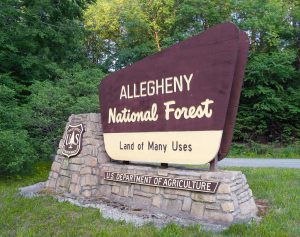 The land that makes up Allegheny Forrest was at first all privately owned. Most of the land was logged, initially for the valuable white pine that made up the bulk of the forest trees. Then in 1859 at oil creek, a natural petroleum seep, Edwin Drake drilled one of the first oil wells, starting the region’s big oil boom. Oil wells sprang up everywhere nearby, and with the crude drilling techniques of the day massive oil spills were commonplace. Literal streams of oil often ran down the hills. 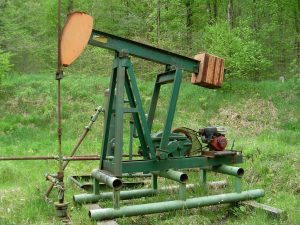 During this era, the loggers returned to cut the remaining cedar trees, which were peeled as they lay for pulp bark to supply the tanning and chemical industry. The wood itself was just left. The oil boom eventually passed, and the area was ravaged by numerous great fires fueled by the remaining slash and debris. In 1911 the federal government started buying up land in the eastern states to create national forests. The almost valueless land around Allegheny was bought up and the land allowed to recover through selective cleanup and replanting efforts. The idea of National Forests was to create a forest that could provide timber, mineral use and recreation all in one.

They have certainly succeeded at Allegheny with this. It is a beautiful place to camp and hike. Timber is cut by permit, in a planned way to keep the moonscape look at bay and surprisingly enough oil and gas are still in production. I find this the most interesting myself, and we stopped and looked at several of the petroleum production sites we passed. The most common site is a pumping well. These are usually marked by a large rocker or “pump jack”, which is run up and down by a small motor and gear reduction box. The “jack” then pulls up and down on a long “sucker” rod which brings the oil up to the surface. 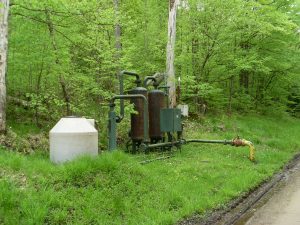 The oil often comes with natural gas, so the top of the well is sealed and the product is sent to a separator tank to let the oil settle and the gas to be drawn off. The gas is then piped off to be distributed to customers, and the oil ends up in large tanks. Some oil is piped out of the hills, and the remainder is picked up by truck if it is not near a mainline. The modern operations are remarkably clean, and the forest roads created to get to them also provide access to back country places such as the very site we were camped on. Except for the occasional whiff of natural gas, probably escaping from poorly sealed century old wells, there is little sign of the great oil rush that took place here. 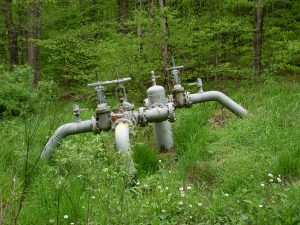 This to me is a great example of the recovering power of Mother Nature, who can recover from the worst transgressions of man, if we just give her half a chance. If managed intelligently, there is room for all kinds of uses in the forest. Even for middle aged campers seeking some rest and relaxation, before returning to the Old Hardware Store… 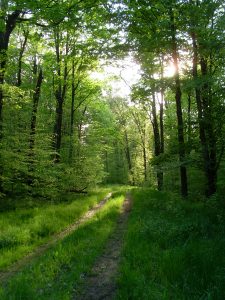