Don’t Go Into The Basement! It’s for the Birds

The weather was really nice yesterday and I decided to do some Spring gardening in the backyard instead of working on the car (my other project). I’m a pretty poor gardener, I usually get lots of weeds and not a lot of produce. I keep trying though, I figure that sooner or later I will get better at it. I’m also diversifying into as many areas of agriculture as I can hoping that the odds of a good harvest will improve if I increase the number of things that I plant. So let’s go over some of the things that I’ve got growing. 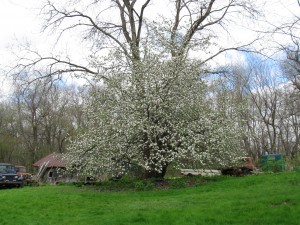 The thing that seems to be doing the best so far is the one that I can take the least credit for. Our “good” apple tree is really in bloom right now and if even a few of these blossoms bear fruit, we’ll be loaded with apples this Fall in time for Cider-fest. Of course I didn’t get the tree sprayed this year before the blossoms came out, so I will have to wait until after they are finished. I don’t know what kind of variety it is, some kind of heirloom I’m sure. The apples are green, hard and sour. They make great cider mixed with a sweeter variety. 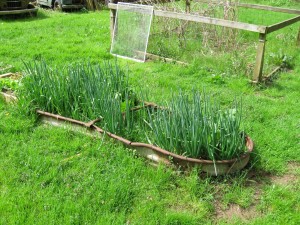 I checked on the green onions that grow all year long in a (sort of) raised bed that I made out of an old horse watering trough. They do well all by themselves. All I have to do is weed them a little now and then, and they just keep growing. They do fine through the winter too, they just get knocked down by the snow, and when it melts they just pop right back up. 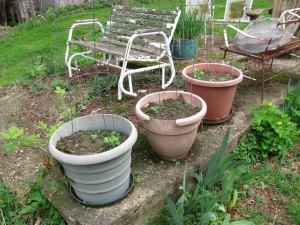 My next project was taking the screen off the peas. I’m sure most folks don’t have to grow their peas under cover, but last year out peas got wiped out by chipmunks, and this year I’m not taking any chances. I’ve got old window screen to cover the pots until the plants are too big (hopefully!) for the chipmunks. I’m now taking it off and putting tomato cages in the pots for the peas to climb. I also plant a tomato in the middle, so that when the peas are done, the tomatoes can grow in their place. 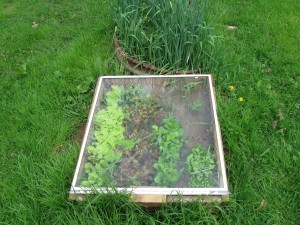 My new project this year was building a cold frame to start lettuce early. I had a salvaged storm door window and some spare lumber, so I knocked it together a few weeks ago. The lettuce sprouted and grew well through the last snows of winter, but last time I checked the lettuce was up against the glass. I was ready to take the glass off, but I have a family of rabbits living under the Land Rover, and I figured they would be in there in a flash. So I got some fence stakes and chicken-wire to create a small fence around it to keep them at bay. 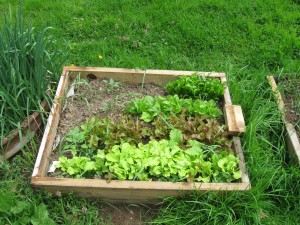 That was about it, except for transplanting the Paw-Paw seedlings that are growing down by the creek, but more about them later…