Lettuce Entertain You I Have Many Hangups

It’s for the Birds

Now that the weather is getting warmer, my wife Mary Anne and I like to go out walking when we have time and last weekend we did. We were up at our cottage in Fairport Harbor and as we had already walked around town and down to the beach, we were looking for somewhere else to go. There are several parks that have trails within a short driving distance and we picked one of those, called The Bluffs to go to. It is run by the Lake County metroparks and they do a pretty good job managing their parks. 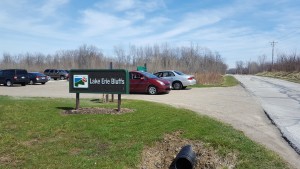 The Bluffs is their newest park up on the shores of Lake Erie and they are still developing it. It has two parking lots, one at either end, and a trail at each heading down the bluff (hence the monicker) to the beach. The beach is undeveloped, just a rocky and sandy shore with lots of logs drifted up on it. It is a great place to walk and it is usually not too crowded. The western parking area has a pavilion located there to picnic and the eastern one had only a restroom, until now. 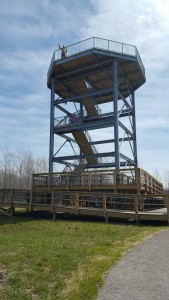 When we went there early this year we found that they had erected a huge steel tower near the eastern parking area. It looks like something for the Coast Guard to use to keep a lookout for a Canadian invasion or something, but the sign indicated that it was an observation tower for looking at migratory birds. I’m not much of a birder myself, but even I know that the Lake Erie shore is a great place to look for birds. They have to cross the lake going both North and South and they usually stop at the shore going both ways. Going North they rest and flock up before attempting the crossing and in the Fall, going back South they often rest there after the long flight across. We have even seen migratory Monarch butterflies resting on the beach in the fall after flying over from Canada (Hey buddy, let’s see some papers!). 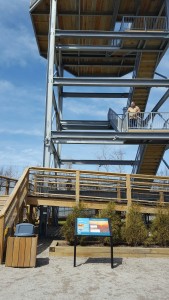 We didn’t climb the tower the first time we were there, it was too cold and windy. This time, however, it was a nice day and we took turns going to the top while the other person stayed safely on terra firma holding onto Velvet. She had way too much sense to want to go up, and besides, there was a sign saying, “No dogs”. Neither Mary Anne or I are too wild about heights, but we both made it up to the top to look around, just don’t get me too close to the edge. There was a great view, and we could easily see the Fairport Harbor lighthouse in the distance. 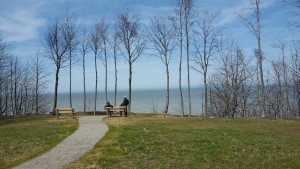 After we came down, we went for a more sedate walk along the beach and then headed back to the cottage for a nap. Now that’s my kind of afternoon activity.