When A Tree Falls… An Oldie But A Goodie

Let There Be (More) Light

Those of you who are my regular readers might remember a previous post about fixing lights for the store (see “Let There Be Light”). Well, here is another installment. I found some “new” lights at the second hand store, and since I liked them and they were cheap (like me) I bought them for the store. 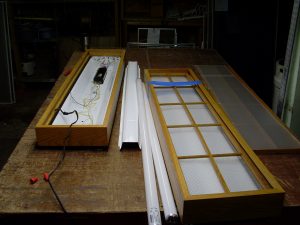 Like last time, these lights were fluorescent and unlike last time they didn’t work at all. I took the grates and diffusers off and then removed the wiring covers inside the fixtures. Looking at the ballasts, I noticed that the labels and paint were scorched, both a common sign that the ballasts had gotten abnormally hot. This was the cause of the lights non-functionality. Ballasts cannot be repaired, only replaced, and taking into account the cost of new ballasts and tubes, I decided to try something else. 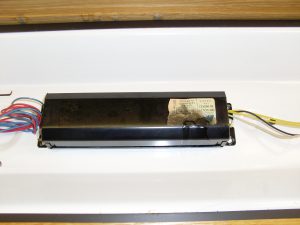 For awhile I have been looking at LED replacement tubes to fit existing fluorescent fixtures. I checked prices and decided that this was a great opportunity to try some out. I carefully checked out the various tubes available to make sure that I ordered the right ones. You see, there are two types of tubes available. One type is sort of plug-and-play, you just take the old fluorescent tubes out of a working light fixture and then replace them with new special LED tubes that take their power directly from the old ballasts, using the existing wires and tube holders. This gives you the advantage of more efficient, longer lasting lamps, without taking the trouble to rewire your fixtures. 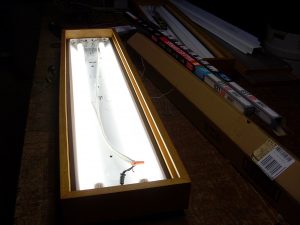 The other type of replacement tube is the kind I needed. These run directly from 110 volt line current not from the old ballast. My ballasts were junk anyway, so I removed them and cut off the connecting wires. The replacement tubes still mount in the existing tube holders, but there is no electrical connection. The lights are then wired directly into the power wires for the building. I wired up a dummy electrical test cord and tested the lights on the bench. Boy, they were bright. 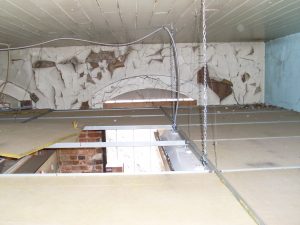 Next I had to drop (not literally) the existing light in our housewares department. It was an old, ugly-as-sin exposed tube fluorescent, that having no reflector, did a lousy job of lighting that area. This required turning off the power, and poking my head above the existing drop ceiling. What an adventure. The existing light was just mounted on the drop ceiling frame, and I did not want to mount the new fixtures that way. Firstly, with their wooden coverings, they were much heavier than the old fixture, secondly there were going to be two of them! With about four times the weight, I decided to hang them from the old wooden ceiling above the drop panels. I could put a couple eye screws in the wood, make a couple of extension pieces out of light twist-link dog chains, just notching the panels to let the chain pass through. I used two long eye-bolts run through holes drilled in the top of the fixtures to allow the lights to attach to the chain and allow for fine tuning the height to match the existing ceiling. 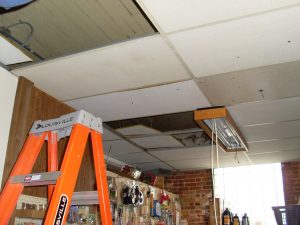 I got the hanging chains in place and with a little help from Jared, hung the lights without too much trouble. I brought the existing power feed into the first light and wire-nutted it together, attaching a second piece of romex to daisy chain the second light to the first. I then ran the romex to the second fixture and wired it like the first. I then tested the lights and replaced the ceiling panels. A flick of the switch and there you go, lots of light. 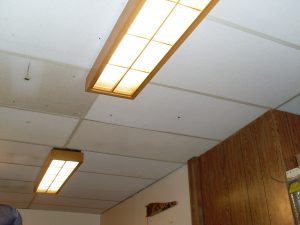 As far as performance goes the old fixture had two miss-matched tubes, one 40 and one 34 for a total wattage of 74. The new tubes were 18-1/2 watts apiece, also a total of 74. The old tubes were rated to put out 4075 lumens of light, while the new ones produced a total of 8360. So for exactly the same power consumption, I am getting more than twice as much light. As far as maintenance is concerned, the old tubes are rated for 20,000 hours. This sounds like a long time, but since we are open all the time (it seems like), that comes out to about 6-1/2 years. The new tubes are rated for 50,000 hours, or over 16 years in comparison. You can bet I’ll keep track, here at the Old Hardware Store…