Let There Be Light (Steam Powered, Of Course!)

Well, for those of you that aren’t keeping score, tomorrow is the first Sunday in March.  In Burton that means just one thing, PANCAKES!  Actually that’s not entirely correct; it also means STEAM at Hill Hardware.  You see, March is the only time that Hill Hardware is open on Sundays (thank the powers that be).  It also means that it’s time for me to get out one of my toy steam engines to entertain the pancake folks.   This usually isn’t a big deal, as I keep the set-up in the back room and it’s pretty much ready to go. 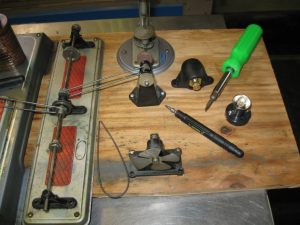 This year is different, though, as I am setting up a new piece of equipment for the steam engine to drive, a generator.  I got a toy Wilesco generator several years ago, and I’ve been meaning to get it mounted and ready to go even since, but I’ve never done it.  I happened across it last week and I figured that it was a sign to get it done for this year.  I got everything out today and my friend Scott and I tried to set it up.  I had to rearrange all the tools running off the line shaft to make room for the generator.  I also had to move the pulleys around to get the speed ratios that I needed.  The toy pulleys work just like real ones, big driving small gives you more speed and less power.  Small driving big cuts the speed, but increases power or “torque”.  The instructions said to drive the generator as fast as possible, so I set up four pulleys to give several speeds from medium to fast. 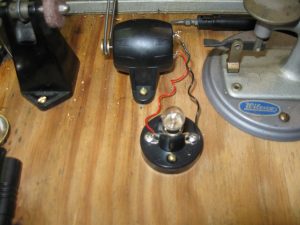 Once it was all set, we fired up the boiler and gave it a test run, nothing.  I checked the bulb, and it was OK.  It was a 6 volt bulb, so I put a volt/ohm meter across the terminals on the generator and we were getting about 3 volts unloaded but it dropped to 0.15 volts when we screwed the bulb back in.  The generator just would not put out enough power to run it.  We then tried a 3 volt bulb and then a 1.5 volt (convenient having a flashlight bulb assortment handy), nada.  These were all old fashioned incandescent lamps, and we just did not have enough power.  Then I had a brainstorm.  LED flashlights take very little power compared to incandescent.  I didn’t have any LED flashlight bulbs, but I did have LED flashlights.  I decided to sacrifice one of the less expensive ones, and I took it and cut it off right behind the reflector section.  Hooking it up to the generator setup with some jumper wires we got it to light right up. 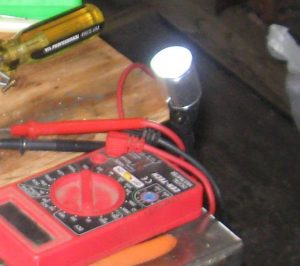 I fabricated a mount for it out of a piece of wood and epoxied it to the top.  It looks just like a little searchlight when you fire it up.  I don’t have a picture of the finished product, so you’ll just have to come see it tomorrow, at the Old Hardware Store…