We’ve really been having some weather the last few days, haven’t we? I suppose that we can’t complain too much as the two last Winters have been fairly mild. But it’s been pretty cold (it was -2 degrees this morning and that’s Fahrenheit, not that wimpy Celsius scale), and we’ve been getting snow every day. “How much snow did we get?” Well it depends on where you are. One thing that You’ve got to understand is “Lake effect”. If you live in Northeast Ohio you know all about it. For you out-of-towners I’ll give you a brief explanation of how it works. 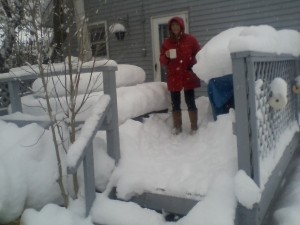 For snow to fall you need moisture in the air and cold temperatures. Pretty much everywhere in the North gets the cold temperatures, but the secret ingredient is the moisture. Where does the moisture come from, Lake Erie, of course. They don’t call it a “great” lake for nothing. Our prevailing winds around here are from the West. They vary from the Northwest to the Southwest, but anything except the Southwest means that they blow across Lake Erie. Lake Erie is plenty big, but it’s the shallowest of the Great Lakes, meaning that it gets the warmest over the Summer. That’s great for fishing, swimming and other water-related activities, but it also causes problems. In the early Winter the wind blowing across all that warm lake water can pick up tons of moisture and when the air moves inland it gets colder and “Bang!” down comes the white stuff. 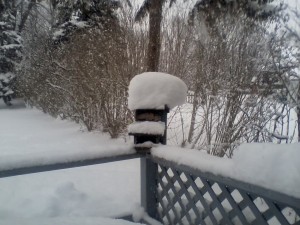 The only question is, “Where?” If the wind is from the Northwest (most often) we get snow here in Geauga County. It starts in the North and comes down as far as Burton. The wind, however, Comes into play here and the harder it blows the farther South the snow ends. With a good blow, we get it at home in Welshfield as well. When the winds shift West, the snow blows East and falls along the lake shore. That’s what happened this last week, all along the north-coast snow fell all the way up to Erie, PA. These pictures are from our cottage in Fairport Harbor. When we left to go there last weekend there was only about six inches of snow at home, but once we drove 45 minutes North we were in a Winter wonderland. Our dog, Velvet loved it, but she didn’t have to shovel out the driveway. That task was left to yours truly. 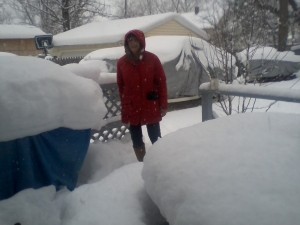 This lake effect fun can go on as long as the lake has open water. Once it freezes over for the Winter the snow machine turns off for the season. It’s been cold, like I said, and they are saying the lake is mostly frozen now. That’s fine with me, I’ve shoveled enough this year, at The Old Hardware Store…